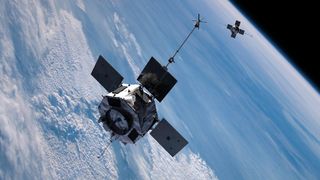 Two NASA probes are helping scientists get a better understanding of how the giant belts of radiation around Earth affect the spacecraft circling the planet.

"The Van Allen Probes are gathering great measurements, but they can't tell you what is happening everywhere at the same time," Geoff Reeves, of Los Alamos National Laboratory in New Mexico, said in a statement earlier this month. "We need models to provide a context, to describe the whole system, based on the Van Allen Probe observations."

The Van Allen belts — named after James Van Allen, who discovered them in 1958 — are like two enormous doughnuts that encircle Earth. The space doughnuts are composed of charged particles — including protons, electrons and various other ions — that are held in place by Earth's magnetic field. Because the particles have so much energy, they can damage instruments in orbit.

These particles are doubly dangerous because their behavior has so far been unpredictable; depending on the sun's activity, their energy can jump drastically, sometimes to 99 percent the speed of light. Scientists would love to be able to predict this behavior — a skill that would help them design spacecraft that can better withstand the rigors of the space environment.

The Van Allen Probes are bringing scientists closer to achieving that goal. The spacecraft provide crucial information to a computer model developed by Los Alamos scientists — known as DREAM3D (short for Dynamic Radiation Environment Assimilation Model in 3 Dimensions) — which had relied heavily on data gathered in the early 1990s by NASA's Combined Release and Radiation Effects Satellite.

For example, scientists compared simulations generated by DREAM3D against data collected by the Van Allen Probes and NASA's Advanced Composition Explorer satellite during a powerful solar storm in October 2012.

DREAM3D did a pretty good job of predicting the major effects, researchers said.

"That gives us some confidence in our model," Reeves said. "And, more importantly, it gives us confidence that we are starting to understand what's going on in the radiation belts."

The two new studies were published in the journal Geophysical Research Letters.