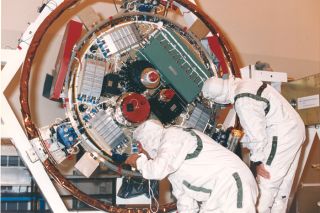 NASA technicians at the Jet Propulsion Laboratory inspect and repair damage inside the Huygens probe before its successful launch in 1997.
(Image: © NASA.)

In this historical photo from the U.S. space agency, Jet Propulsion Laboratory (JPL) workers examine the Huygens probe after removal from the Cassini spacecraft in the Payload Hazardous Servicing Facility (PHSF) at KSC. The spacecraft was returned to the PHSF after damage to the thermal insulation was discovered inside Huygens from an abnormally high flow of conditioned air. The damage required technicians to inspect the inside of the probe, repair the insulation, and clean the instruments.

After returning from the PHSF to Launch Pad 40 at Cape Canaveral Air Station, Cassini/Huygens launched successfully in October 1997, and reached Saturn in July of 2004. Scientific instruments carried aboard the Cassini orbiter will study Saturn's atmosphere, magnetic field, rings, and several moons, while the Huygens probe will separate and land on the surface of Titan, Saturn's largest moon.

The Cassini-Huygens mission owes its name to the Dutch astronomer Christiaan Huygens and Italian astronomer Giovanni Domenico Cassini. Both had spectacular careers as observers of the heavens, which included important discoveries about Saturn and its satellites. Huygens (1629-1695) discovered Saturn's largest moon, Titan, in 1655 and in 1656 described the shape and phase changes of Saturn's rings. Cassini (1625-1712) was the first to observe four of Saturn's moons, Iapetus, Rhea, Tethys, and Dione, in the 1670s and 1680s. He also, in 1675, discovered the gap in Saturn's rings, now called the Cassini Division, and proposed that the rings were formed from many tiny particles.

Cassini-Huygens is a joint mission of NASA, the European Space Agency (ESA), and the Italian Space Agency, Agenzia Spaziale Italiana (ASI). JPL is managing the Cassini project for NASA. The mission was proposed in November 1982 by a group of European and American scientists from the European Science Foundation and the National Academy of Sciences. The Solar System Exploration Committee of the NASA Advisory Council endorsed the idea in April 1983, and NASA and ESA began a joint assessment study in 1984. ESA officially adopted the project in November 1988, and Congress approved funding for NASA's portion of the mission in FY 89.