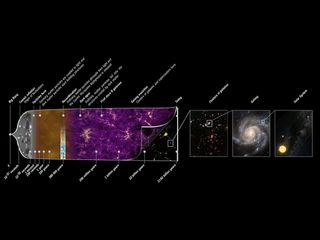 This illustration summarizes the almost 14-billion-year-long history of our universe. It shows the main events that occurred between the initial phase of the cosmos — where its properties were almost uniform and punctuated only by tiny fluctuations — to the rich variety of cosmic structure that we observe today, ranging from stars and planets to galaxies and galaxy clusters. Image released March 21, 2013.
(Image: © ESA and the Planck Collaboration)

Scientists will unveil what they are calling a "major discovery" in the field of astrophysics today (March 17) in a presentation at the Harvard-Smithsonian Center for Astrophysics (CfA).

CfA officials did not detail the nature of the astrophysics discovery in a media alert. They only stated that the center will "host a press conference at 12:00 noon EDT (16:00 UTC) on Monday, March 17th, to announce a major discovery." Space.com will provide complete coverage of today's announcement.

The Harvard-Smithsonian Center for Astrophysics is made up of the Harvard College Observatory and the Smithsonian Astrophysics Observatory. Scientists at the center pursue studies of those basic physical process that determine the nature and evolution of the universe," according to the CfA website's official description.

"Today, some 300 Smithsonian and Harvard scientists cooperate in broad programs of astrophysical research supported by Federal appropriations and University funds as well as contracts and grants from government agencies," CfA officials explain in a description. "These scientific investigations, touching on almost all major topics in astronomy, are organized into the following divisions, scientific departments and service groups."