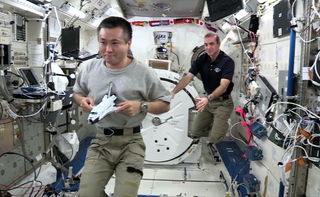 The new "Cosmos" science TV series on Fox has received an out-of-this-world from astronauts on the International Space Station in a new video showing how weightlessness works.

Newton's law states that every action produces an equal and opposite reaction. To demonstrate this, Mastracchio pushes his colleague Japanese astronaut Koichi Wakata, commander of the International Space Station, along with a model of NASA's now-retired space shuttle. As Wakata and the model spacecraft float forward, Mastracchio drifts backwards.

"This is simple science but the more complex science we're doing here on the space station will help us bring real world benefits back to humanity on Earth, as well as take us further into the cosmos than ever before, including to an asteroid, the moon or on to Mars," Mastracchio said.

Astrophysicist Neil deGrasse Tyson, host of "Cosmos: A Spacetime Odyssey," introduced the video of his "friends in high places," saying, "when you're doing science, you have to do experiments."

Mastracchio and Wakata are two of six people currently aboard the $100 billion space station, which has been continuously occupied by rotating crews of astronauts since 2000. Three of their colleagues, NASA astronaut Mike Hopkins and Russian cosmonauts Oleg Kotov and Sergey Ryazanskiy, are set to leave the orbiting outpost Monday night and return to Earth in a Russian Soyuz capsule.