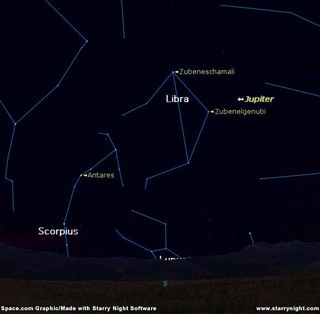 In our discussion a couple of weeks ago about the "Jupiter Triangle" that currently adorns our evening sky, I had failed to mention that Jupiter is currently located within the constellation of Libra, the Scales, one of the twelve constellations that form a belt around the sky, called the Zodiac.

It is toward the Zodiac we must look in order to find the Sun, the Moon and the Planets.  And of all of the zodiacal constellations, Libra is the only star pattern that does not represent a person or an animal.

Known as the Scales or the Balance, Libra is marked by an oblong figure of stars and owes its importance only to its position in the zodiac. It supposedly consists of a beam with two pans hanging from it, for weighing things.  The load in the right-hand pan must be heavier, for the balance is tilted down on that side.  Libra was once associated with the constellation Virgo, as the scales of the goddess of Justice which that figure was supposed to represent.

Many years ago, one of the long-time lecturers at New York's Hayden Planetarium reprimanded me after I had given a sky show and pointed out Libra to my audience:

I initially did not believe him, especially since I knew that the word library had its origins from the Latin word "libraria" (meaning book), while Libra was Latin for "balance;" hence two totally different things.  But when I returned home and did some checking, I found that the World Book Encyclopedia (Field Enterprises Educational Corporation) indeed suggested the pronunciation LY-bruh, while The American Heritage Dictionary of the English Language (Houghton Mifflin Company) deems both LY and Lee as acceptable.

Now, whenever I look at Libra, I always think of my former Hayden colleague and in deference to him, stress the LY.

Just to the east (left) of Libra these June evenings, the most beautiful zodiacal constellation can be found emerging into view low in the southeast sky: Scorpius, the Scorpion.  Scorpions have two large claws in front, but this one seems to have had his claws clipped.  In fact, the claws were indeed cut off to form Libra. A few thousand years ago, the Romans decided that there should be 12 constellations in the zodiac, instead of 11, so they made the two claws of Scorpius into the arms of Libra.

Libra was also known as "the Claws" of Scorpius the Scorpion to the poet Aratus and others of classical times.  In fact, two of Libra's stars still bear the Arabic names, Zubeneschamali and Zubenelgenubi, meaning respectively, "Northern Claw" and "Southern Claw." Zubeneschamali also has a very faint greenish tinge: the only green naked-eye star.

Interestingly, Jupiter has been engaged in an unusual triple conjunction with Zubenelgenubi this year. It passed to the north of this star in January, passed it again in April (as Jupiter was moving west against the background stars in retrograde motion) and will pass closely north of this star for a third and final time on September 11.

The whole figure of the Scorpion is truly a magnificent sight-sort of a "celestial fish-hook"-and is best appreciated now a dark sky without any interference from bright moonlight. It really looks like a huge scorpion, with its long stinging tail curled over its back. It should be pointed out here that the currently accepted name of this constellation is Scorpius, not Scorpio.

Principally astrologers (and some older astronomy books) use the latter for labeling the zodiacal sign of that name.

One star clearly outshines the others, with a fiery tinge seemingly emphasizing the scorpion's sinister appearance.  That's Antares, the so-called "rival of Mars," Ares being Greek for Mars.  Antares is a supergiant, 700 times the Sun's diameter, over 9,000 times as luminous and located 604 light years away.  The stars Shaula and Lesath are a close pair of stars in the Scorpion's stinger.  Astronomy popularizer Hans A. Rey (1898-1977) christened these stars the "Cat's Eyes," noting, "You will find the name quite fitting."