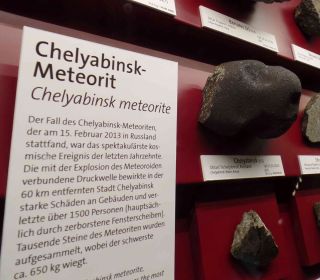 The explosion of a meteor over the southern Ural region of Russia last year peppered the area with varying sizes of space rock leftovers.

That stunning Feb. 15, 2013, event and the resulting shock wave caused considerable damage to lots of buildings and injured more than 1,500 people — primarily from shattered windows — in the city of Chelyabinsk, more than 35 miles (about 60 kilometers) from the explosion site.

Many of the recovered Chelyabinsk fragments are now on display at the Natural History Museum in Vienna, and are appropriately showcased in Meteorite Hall. Overall, that collection includes about 1,100 meteorites, including 650 different meteorites, consisting of 300 falls and 350 finds. When a meteorite is viewed falling from the sky and then collected on terra firma afterward, it is called a fall. Meteorites that are recovered without being seen 1falling are called finds. [See photos from the Russian meteor explosion]

Just a few days after the Chelyabinsk fall, the museum acquired a dozen small stones. Several more samples of the Chelyabinsk meteorite were acquired later, including a large single fragment weighing 13.65 ounces (387 grams).

That big sample was put on display in the museum's Meteorite Hall exactly one year after the fall. It's in showcase 85, in the central part of the display, next to the historically important and precious Ensisheim samples — a fall that occurred in 1492.

The largest recovered stone of the Chelyabinsk fall, which weighs more than 1,430 lbs. (650 kilograms), was hauled out of Lake Chebarkul in Russia.

Surviving the atmospheric fall, fireball fragments hit the frozen façade of the lake, making a 20-foot-diameter (6 meters) hole in the icy topside. The big chunk that was dredged up is now displayed in the Chelyabinsk State Museum of Local History in Russia.

Researchers at the Natural History Museum in Vienna have performed scientific investigations on the Chelyabinsk fragments within the framework of an interdisciplinary and international study.

According to museum scientists, petrographic observations of the recovered bits and pieces of the object have led to several observations:

The results of the joint research on the fragments have been submitted for publication to the journal Meteoritics & Planetary Science.

Though they have cooled down, the Chelyabinsk fragments remain, to some extent, hot property, said Michael Gilmer of Galactic Stone and Ironworks in Lutz, Fla.

"The Chelyabinsk fall dropped over one ton of meteorites — and probably closer to two tons, taking into account unreported finds," Gilmer told Space.com. "This consists of thousands of complete stones and partial fragments."

Gilmer said the collector market is saturated with specimens from the Chelyabinsk fall, ranging from less than a gram to roughly a kilogram. About 20 percent of the stones are the secondary impact melt lithology.

"Prices vary widely," Gilmer said, "but a rough range is $5 a gram for oxidized broken fragments to $25 a gram for select fresh whole stones with orientation features."

Note: Special thanks to Verena Randolf of the Natural History Museum in Vienna for assistance in this story.

Leonard David has been reporting on the space industry for more than five decades. He is former director of research for the National Commission on Space and co-author of Buzz Aldrin's new book, "Mission to Mars – My Vision for Space Exploration," published by National Geographic. Follow us @Spacedotcom, Facebook and Google+. Original article on Space.com.