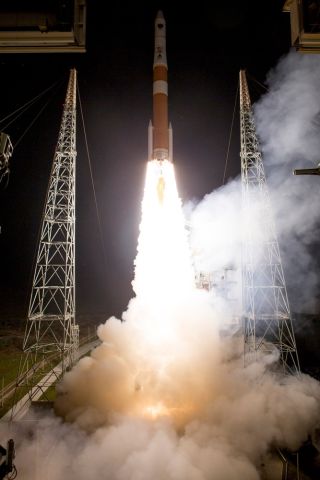 CAPE CANAVERAL — Igniting a surge of three Global Positioning System satellite launches in the next five months, a Delta 4 rocket blazed a trail of fire and light into the Florida sky Thursday night (Feb. 20).

The new bird — known as GPS 2F-5— will become a primary broadcasting satellite in the constellation when it becomes operational by May.

The United Launch Alliance vehicle darted off Complex 37 on 1.2 million pounds of thrust and headed east-southeast, burning its two strap-on boosters for 90 seconds while the hydrogen-fed main engine burned for four minutes.

The upper stage then took over for a three-and-a-half hour climb featuring three engine firings to deliver the payload directly into the GPS constellation 11,000 nautical miles above the Earth in an orbit tilted 55 degrees.

It was the 25th flight of a Delta 4 rocket and ULA's 79th flight overall.

This becomes the fifth of Boeing's dozen Block 2F spacecraft to be launched. Together, they will form the backbone of the GPS network for the next 15 years.

"We have a lot of satellites well past their design life. In this particular case, the satellite we are replacing is over 16 years old and its design life was 7.5 years. We are trying to prevent any sort of outage and having some backup capability on-orbit."

The Air Force plans two more GPS satellite launches in the coming months — May 15 on a Delta 4 rocket and in July aboard an Atlas 5 — to to further swap out the old with the new.

"Sometimes we joke those are getting old enough to vote and some are old enough to drink, and they're well past their design life. The oldest is 23 years. We've gotten remarkable performance out of them, but they are aging," Cooley said.

Today's constellation has 31 primary satellites and five backups that remain in the network but don't contribute to the navigation signals. That number will grow to a half-dozen with the successful placement of GPS 2F-5 into the fleet this spring.

With Thursday's launch, the GPS 2A-28 satellite is marked for removal from Plane A, Slot 3 of the broadcast system and put into the reserve role for the time being. Its re-entry into the constellation would only come in a dire need.

All three launches this year will target GPS 2A birds for replacement, Cooley said. Eight were remaining in use going into Thursday's launch.

"We are really frugual and whenever there's some life capability we are really conservative; we make sure we have options," Cooley said.

GPS is marking the 20th anniversary of its Initial Operational Capability, the point at which the constellation was populated sufficiently to go into service.

"GPS is being used worldwide in ways we don't even think about and we kinda take for granted," Cooley said.

"GPS has grown to become a vital worldwide utility serving billions of users around the globe. GPS multi-use Precision Navigation and Timing services are integral to the United States global security, economy, and transportation safety, and are a critical part of our national infrastructure," the Air Force says.

"GPS contributes vital capabilities to our nation's military operations, emergency response, agriculture, aviation, maritime, roads and highways, surveying and mapping, and telecommunications industries, as well as recreational activities. It is not an overstatement to say GPS is fundamental to today's technical infrastructure and culture."