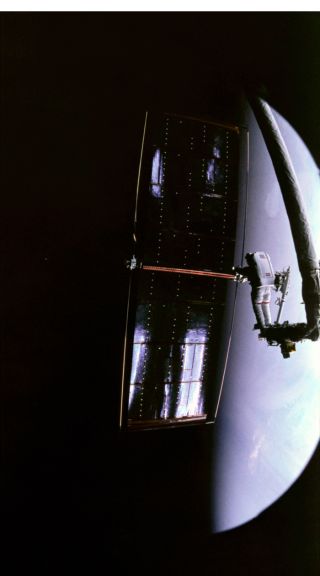 Astronaut Kathy Thornton prepares to release the damaged array after completing the first servicing mission to the Hubble Space Telescope in 1993.
(Image: © NASA.)

In this historical photo from the U.S. space agency, Astronaut Kathy Thornton prepares to release the damaged Hubble Space Telescope  array after removing it.

To run all their systems, satellites need a way to generate power for months, even years. Most Earth-orbiting spacecraft, like the Hubble Space Telescope, rely on solar cells to recharge their onboard batteries. But solar panels have their own set of problems. They must be lightweight and flexible to fit inside a relatively small launch vehicle. Consequently, they tend to be fragile, and several satellites have had to cope with damaged panels once in orbit. [See more photos of Hubble Space Telescope servicing missions ]

That is what happened to the Hubble Space Telescope. Fortunately, the telescope was designed for on-orbit repairs, and astronauts were able to remove the damaged panel and replace it with a new one. In this image, Astronaut Kathy Thornton releases the old panel into low-Earth orbit during the first Hubble Space Telescope Servicing Mission in 1993. Earth's gravitation pulled the jettisoned panel toward Earth's atmosphere, where it entered and ultimately burned up.