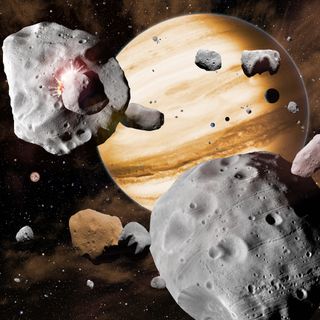 In this artist's conception, Jupiter's migration through the solar system has swept asteroids out of stable orbits, sending them careening into one another. As the gas giant planets migrated, they stirred the contents of the solar system. Objects from as close to the Sun as Mercury, and as far out as Neptune, all collected in the main asteroid belt, leading to the diverse composition we see today.
(Image: © David A. Aguilar (CfA))

A better understanding of the asteroid belt has revealed just how dynamic the solar system was in its early days, a new study reports.

Over the past decade, astronomers have come to realize that the asteroids in the main belt between Mars and Jupiter are incredibly diverse in size and composition. This diversity dashes earlier notions that the space rocks all formed where they now sit, instead implying that they were scattered here and there by migrating planets in the first billion years of solar-system history.

"In modern dynamical models, the giant planets are thought to have migrated over substantial distances, shaking up the asteroids — which formed throughout the solar system — like flakes in a snow globe, and transporting some of them to their current locations in the asteroid belt," Francesca DeMeo and Benoit Carry, of the Harvard-Smithsonian Center for Astrophysics and the Paris Observatory, respectively, write in a study published online today (Jan. 29) in the journal Nature. "The main asteroid belt thus samples the conditions across the entire solar system." [The Strangest Asteroids in the Solar System]

While the basic idea of planetary migration has been around for a while, the effect of such movements on the asteroid belt has just begun to be appreciated in the last decade or so, DeMeo and Carry write in their paper, which reviews recent advances in the discovery and characterization of rocks in the belt.

In the 1980s, for example, astronomers identified a distinct color gradient in the belt, with reddish space rocks clustering near the inner edge and bluer asteroids found farther out. These differences were attributed to thermal alteration, with the redder rocks being more heat-treated than the relatively pristine bluer asteroids.

Many researchers thus thought that most asteroids in the belt haven't strayed far from the orbits in which they formed. But newer findings have put the lie to the notion of a static asteroid belt, the researchers said.

"That trend doesn't hold at the smallest sizes, which hints that the solar system was more dynamic than we originally predicted," DeMeo told SPACE.com via email.

Indeed, the distribution and composition of asteroids in the belt suggest that Jupiter made a sunward move early in solar system history, perhaps coming as close to our star as Mars is today, the researchers say.

"Jupiter would have moved right through the primordial asteroid belt, emptying it and then repopulating it with scrambled material from both the inner and outer solar system as Jupiter then reversed course and headed back towards the outer solar system," DeMeo and Carry write, stressing that further observations should nail down how faithfully this scenario represents reality.

While recent asteroid surveys are shedding light on the history of our own solar system, they could reveal insights about the formation and evolution of exoplanet systems as well, the researchers said.

"Our solar system is sort of the gold standard for planetary systems; we have so much more detail about our own solar system that it can help fill in the gaps with extrasolar systems," DeMeo told SPACE.com via email. "The understanding goes both ways, though, because the idea of planetary migration and a more dynamic planetary system history was really propelled by what we saw around other stars."

While astronomers have made a lot of progress in the last decade or so, much remains to be learned about asteroids, DeMeo and Carry say. For example, little is known about the interior structure of space rocks.

"Asteroid interiors are the terra incognita for the next generation of asteroid researchers," they write. "An asteroid’s interior reveals its thermal history, which constrains the initial conditions of the protoplanetary disk during planetesimal formation."

NASA's Dawn spacecraft provided a rare glimpse inside the huge asteroid Vesta recently, and the probe will return similar data about Ceres — the largest body in the asteroid belt — when it arrives at the protoplanet next year.