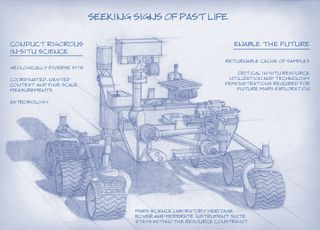 NASA has received a whopping 58 science-instrument proposals for its next Mars rover, which is slated to launch in 2020 to search for signs of past Red Planet life.

The  proposals are double the usual number submitted during such instrument competitions, NASA officials said. The agency has begun reviewing the ideas and expects to choose the final science gear for the 2020 Mars rover in the next five months.

"Proposal writing for science missions is extremely difficult and time consuming. We truly appreciate this overwhelming response by the worldwide science and technical community and are humbled by the support and enthusiasm for this unique mission," John Grunsfeld, NASA's associate administrator for science, said in a statement. [NASA's 2020 Mars Rover (Images)]

"We fully expect to be able to select an instrument suite that will return exciting science and advance space exploration at Mars," he added.

The 2020 rover will be based heavily on NASA's Mars rover Curiosity, which landed in August 2012 to determine if the Red Planet could ever have supported microbial life. The Curiosity team has already answered this question in the affirmative, finding that a spot called Yellowknife Bay was indeed habitable billions of years ago.

The new rover will take things one step further, hunting for evidence of past life on Mars. The robot will also collect soil and rock samples for eventual return to Earth, which most scientists regard as the most effective way to search for indigenous Martian organisms.

The 2020 rover will also help advance NASA's primary long-term goal in the realm of human spaceflight — putting boots on the Red Planet. The six-wheeled robot will assess the natural resources that could help sustain a manned outpost on Mars as well as the risks that human explorers would face there, NASA officials said.

"The Mars 2020 rover mission presents new opportunities to learn how future human explorers could use natural resources available on the surface of the Red Planet," Bill Gerstenmaier, NASA's associate administrator for human exploration and operations, said in a statement. "An ability to live off the land could reduce costs and engineering challenges posed by Mars exploration."

NASA opened the competition for rover instrument proposals in September and closed it on Jan. 15. Submissions came from teams based at a variety of institutions, including NASA research centers, other government agencies, universities and private industry. International partners contributed 17 proposals, officials said.