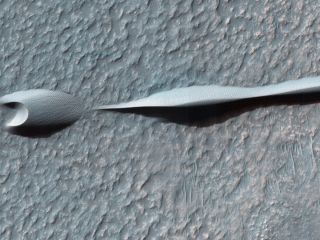 These barchan dunes are located on the western rim of the Hellas impact basin, in the Southern Hemisphere of Mars. Image released Jan. 15, 2014.
(Image: © NASA/JPL-Caltech/Univ. of Arizona)

On Nov. 4, 2013, the day that MRO passed the 200-terabit mark, the orbiting observatory obtained this stunning image of sand dunes on the western rim of the Red Planet's Hellas impact basin.

Researchers call these dunes "barchan," which form when wind blows in one direction for long periods of time. Barchan dunes appear commonly on Mars and in Earth's desert regions. Dunes like these have been observed to creep slowly across the surface of Mars through wind action, researchers said.

Extensive deposits of layered rocks cover this area, initially deposited as loose sediments. Portions of the layered rocks subsequently eroded away, and the remaining layers stood out as flat-topped hills called mesas. The barchan dunes now form in the lee (downwind) of the mesas.

MRO's HiRISE camera previously imaged this area in 2008, and then a public request via HiWish aimed the camera at the same target recently. Comparing repeat images like these can reveal the speed and way in which dunes move across the Martian surface. The image was released on Jan. 15, 2014.

MRO launched toward Mars in August 2005 and arrived in orbit around the Red Planet in March 2006.