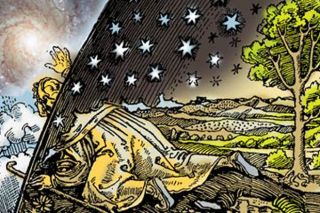 If you could peek outside the universe to see what it looks like, what would you see?
(Image: © Illustration: Karl Tate, based on a photo of Galaxy M74 (NASA, ESA, and Hubble Heritage Collaboration) and the engraving "Awakening of the Pilgrim" from "The Atmosphere: Popular Meteorology" by Camille Flammarion, 1888 )

If you could somehow manage to step outside of the universe, what would it look like? Scientists have struggled with this question, taking several different measurements in order to determine the geometry of the cosmos and whether or not it will come to an end. How do they measure the shape of the universe? And what have they found?

The geometry of the cosmos

According to Einstein's theory of General Relativity, space itself can be curved by mass. As a result, the density of the universe — how much mass it has spread over its volume — determines its shape, as well as its future.

If the actual density of the universe is less than the critical density, then there is not enough matter to stop the expansion of the universe, and it will expand forever. The resulting shape is curved like the surface of a saddle. This is known as an open universe.

If the actual density of the universe is greater than the critical density, then it contains enough mass to eventually stop its expansion. In this case, the universe is closed and finite, though it has no end, and has a spherical shape. Once the universe stops expanding, it will begin to contract. Galaxies will stop receding and start moving closer and closer together. Eventually, the universe will undergo the opposite of the Big Bang, often called the "Big Crunch." This is known as a closed universe. [Images: Peering Back to the Big Bang & Early Universe]

However, if the universe contains exactly enough mass to eventually stop the expansion, the actual density of the universe will equal the critical density. The expansion rate will slow down gradually, over an infinite amount of time. In such a case, the universe is considered flat and infinite in size.

Measurements indicate that the universe is flat, suggesting that it is also infinite in size. The speed of light limits us to viewing the volume of the universe visible since the Big Bang; because the universe is approximately 13.8 billion years old, scientists can only see 13.8 billion light-years from Earth. [Infographic: The History & Structure of the Universe]

Scientists studying cosmology measure the expansion of the universe and its density to determine its shape.

While studying distant galaxies in the early 20th century, astronomer Edwin Hubble realized that they all seemed to be rushing away from the Milky Way. He announced that the universe was expanding in all directions. Since then, astronomers have relied on measurements of supernova and other objects to refine calculations of how quickly the universe is expanding.