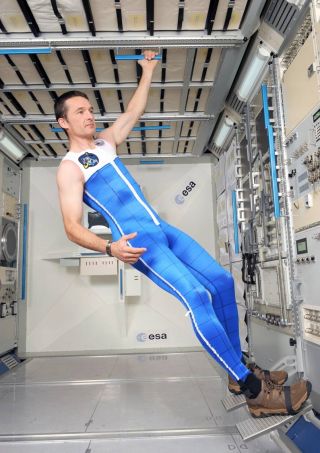 This high-tech "skinsuit" for astronauts is a tailor-made overall with a bi-directional weave specially designed to counteract the lack of gravity to help avoid backaches. It squeezes the body from the shoulders to the feet with a similar force to that felt on Earth.
(Image: © NASA–Waldie)

A new tight-fitting "skinsuit" could help astronauts combat the back problems that are a common consequence of long-term spaceflight, researchers say.

Astronauts have grown as much as 2.75 inches (7 centimeters) during space missions as their spines stretch out in microgravity conditions— a dramatic change that can cause significant pain, European Space Agency (ESA) officials said. The problems often continue back on Earth, as astronauts have a high chance of suffering a slipped disk while working themselves back into shape for terrestrial life.

ESA hopes the new skinsuit will make off-planet living much more comfortable by counteracting the lack of gravity. The garment features a bi-directional weave that squeezes the body from the shoulders to the feet, mimicking the gravitational force felt on Earth. [The Human Body in Space: 6 Weird Facts]

"Getting the suit to fit correctly was challenging," Simon Evetts, medical projects and technology unit team lead at ESA's European Astronaut Center in Cologne, Germany, said in a statement. "We needed to create a suit that is both tight-fitting but comfortable to wear, while creating the right amount of force in the right places."

ESA's Space Medicine Office is working with researchers from Kings College and University College in London and the Massachusetts Institute of Technology to test out skinsuit prototypes, which are currently made of spandex. The suit will get a flight test in 2015, when ESA astronaut Andreas Mogensen wears it aboard the International Space Station, officials said.

While the skinsuit is being developed for use in space, it could have applications here on Earth as well, researchers said.

"If the technology is effective in space, it could help the elderly and many people with lower-back problems on Earth," Evetts said. "Additionally, skinsuit technology could improve the support garments currently used for conditions like cerebral palsy."

Astronauts typically spend about six months living on the International Space Station in a given mission. In 2015, NASA and Russia's Federal Space Agency will launch an astronaut and cosmonaut to the station on an unprecedented one-year mission to study the effects of long-duration weightlessness on the human body to help inform future missions in deep space.