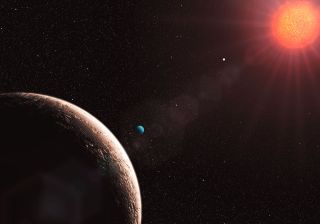 Astronomers have discovered many planets orbiting the star Gliese 581. This artist’s representation shows Gliese 581 e (foreground), which is only about twice the mass of our Earth. Other confirmed planets in the system are 16 (planet b, nearest to the star), 5 (planet c, center), and 7 Earth-masses (planet d, with the bluish color).
(Image: © ESO)

If not for life, Earth may not have possessed the continents it does now, instead becoming a planet covered nearly entirely in ocean, researchers say.

These new findings suggest that any continents astronomers may one day see on alien worlds may potentially be signs of extraterrestrial life, scientists added.

Earth is currently the only known planet in the universe that has liquid water on its surface. There is life virtually wherever there is liquid water on Earth, so one main focus of the search for extraterrestrial life as we know it is the region around a star where it is neither too hot nor too cold for liquid water to exist on a planet, an area known as the star's habitable zone. [9 Exoplanets That Could Host Alien Life]

Although water covers most of Earth's surface, nearly 30 percent of the planet is covered by land, sustaining a dazzling variety of life. Scientists might one day be capable of telling if distant planets are similarly covered by land, oceans and clouds by looking for reddish, bluish or grayish tints in the color of those worlds. Researchers have already developed maps of clouds on a giant planet orbiting a distant star.

Now researchers suggest Earth would have been a water world with very few continents, if any at all, without the presence of life.

A great deal of research has shown that life has had a major impact on the evolution of Earth's atmosphere and oceans. Plants and other photosynthetic life generate oxygen, giving Earth the only known atmosphere in the universe with significant levels of oxygen. Life also greatly influences how much carbon is in the atmosphere and oceans in the form of carbon dioxide and methane. These greenhouse gases trap heat and can dramatically affect Earth's climate, which in turn has an effect on how much of Earth's water is frozen as ice. Oxygen can also indirectly cool Earth's climate by removing methane from the atmosphere — in fact, the dramatic rise of oxygen in Earth's atmosphere about 2.4 billion years ago, known as the Great Oxidation Event, may have cooled the planet enough to for it become a frozen "Snowball Earth."

"However, much less is known about whether life has had any effects on the deeper interior of Earth," said study author Tilman Spohn, a planetary scientist at the German Aerospace Center's Institute of Planetary Research in Berlin. [The Search for Another Earth (Video)]

Past research noted the oldest signs of life found so far are roughly 3.5 billion years old, about the same time continents began growing, and suggested a potential link between these events. The scientists then explored whether or not the evolution of life on Earth could have influenced the evolution of the planet.

The investigators focused on biological weathering, by which life breaks down rock. This crumbled rock gets blown and washed away by wind and water, sediment that eventually makes its way to subduction zones, the areas where one tectonic plate of the Earth's crust dives or subducts under another.

"Lichens that cover rocks provide constant moisture that can weaken rock, while acid from bacteria can dissolve rock," Spohn said.

"When the Earth's surface is recycled in subduction zones, it affects processes in the deep interior," said study lead author Dennis Höning, a planetary scientist at the German Aerospace Center's Institute of Planetary Research in Berlin.

The magnitude of the effects biological weathering have on continental erosion globally are currently under debate, with estimates varying quite widely. To see what these effects might be, Spohn and his colleagues developed models of continent production and erosion that assumed that a world with no life had some fraction of the continental erosion rates currently estimated for Earth.

When the scientists ran their model of Earth with present-day continental erosion rates, it simulated a planet with a wet mantle that, after roughly 4 billion years, had a surface that was covered about 40 percent by continents, roughly similar to the real Earth. However, when the investigators ran their model with continental erosion rates 60 percent or less of present-day values, which one might see on a lifeless Earth, it simulated a planet with a dry mantle that, after some 4 billion years, "had continents covering only about 5 percent of its surface," Spohn said.

"The biggest surprise for me was the pronounced difference we saw," Spohn said. "We hoped to see a difference, but we didn't expect to see such a big difference." Höning, Spohn and their colleagues Hendrik Hansen-Goos and Alessandro Airo detailed their findings online Oct. 25 in the journal Planetary and Space Science.

The evolution of photosynthesis starting at least 3.4 billion years ago may have had an especially large impact on Earth's continents.

"The invention of photosynthesis allowed life to be much more productive, allowed the biosphere to rely on a much larger energy source then before and grow very rapidly in mass, which would have increased the effect of biological weathering," Spohn said.

Spohn added that if the mantle was dry, one might not see plate tectonics, which drives the motions of the tectonic plates that make up the surface of the planet and underlies tectonic activity such as earthquakes and volcanoes. "Plate tectonics needs water to operate," Spohn said. [The Strangest Alien Planets (Gallery)]

Geophysicist Norman Sleep at Stanford University in California, who did not take part in this research, noted that biology could have other effects on Earth's interior. For instance, past laboratory experiments have shown that microbial activity can help transform the soft clay mineral smectite to much stronger and denser illite. Since illite is less permeable to water than smectite, microbial activity could make water more available at greater depths. Preliminary experiments that Spohn and his team conducted suggest this effect could enhance the difference between a life-filled and a lifeless Earth even more.

These findings suggest "if we find a planet somewhere in the universe with a continental coverage similar to the Earth, it may be a good place to search for life,” Höning said.

Still, Höning cautioned that larger planets, such as super-Earth worlds up to 10 times Earth's mass, evolve in a strongly different way than Earth has, so these findings might not apply. Moreover, an exoplanet with a hot surface, a thick atmosphere or strong winds might also experience large erosion rates even without life.

"All these factors have to be taken into account when we try to model continental growth on other planets," Höning said.

Future research can examine the tendency of cracks to form in sediment in subduction zones and the effects this may have on activity in Earth's interior, Sleep said. It can also investigate if volcanic activity at subduction zones varies with levels of sediment flow, Sleep added — with lava from volcanoes eventually building new land.