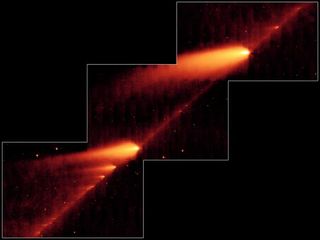 Comet 73P/Schwassman-Wachmann 3 image from taken from May 4 to 6 shows at least distinct 36 fragments.
(Image: © NASA/JPL-Caltech)

A new and detailed view of a crumbling comet will help astronomers figure out how strong a predicted meteor shower in 2022 will be.

Comet 73P/Schwassman-Wachmann 3, or just SW-3, began fracturing in 1995. The breakup has accelerated in recent weeks as the comet again approaches the Sun, as it does every 5.3 years.

Spitzer has returned an infrared image of the scene, revealing three dozen chunks in addition to a broad stripe in the sky created by smaller pebbles and dust. The material glows in infrared because it is heated by the Sun.

On each orbit around the Sun, the comet lays down a new debris stream along a slightly different path. Each stream spreads out over time. When Earth passes near the comet's dusty trails every year, bits of debris burns up in our atmosphere, creating a minor meteor shower called the Tau Herculids.

In 2022, a recent study concluded, Earth is expected to cross closer to the comet's main trails, potentially producing a heavier meteor shower. Another spike could occur in 2049.

Caltech scientist William Reach, who led the Spitzer observations, said they might change expectations for 2022.

Reach said it is unlikely the 2022 event will be a major one like the spectacular Leonid meteor showers in recent years.

"But the door's open," Reach said in a telephone interview.

He said the big chunks coming off the comet move backward before dispersing, something that is not predicted in existing computer models. So to forecast what Earth will plow through in 2022 will now require some reworking of the models. Images and data of the comet provided recently by the Hubble Space Telescope will also go into that effort, he said.

It could take a year or more to do the detailed new simulations, Reach said.

Meanwhile, backyard skywatchers have been tracking the comet's disintegration, and there are a few days left to catch the view.