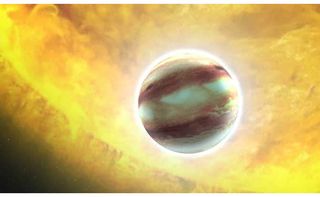 This is an artist's concept of a "hot Jupiter" planet known as HAT-P-7b. This planet orbits a star that is much hotter than our sun.
(Image: © NASA; ESA; G. Bacon, STScI)

If life does exist anywhere else in the universe, it may only be fleeting. Now scientists are researching how signs of life might look on dying planets.

Astronomers have discovered hundreds of distant alien planets in the past two decades. Future missions could detect potential signs of life called biosignatures on those worlds, such as oxygen or methane in their atmospheres.

Astrobiologist Jack O'Malley-James at the University of St. Andrews in Fife, Scotland and his colleagues noted that biosignatures of life on Earth have not remained the same over time, but have altered considerably over its history. This led the researchers to speculate about how Earth and other planets might look in the future.

"Astrobiology as a field seems to put a lot more focus on the origins of life and how to find life beyond Earth, but less emphasis is put on the end of life, which is what got me interested in finding out more about how biospheres on other planets might meet their ends, and by extension, how long we could expect to detect life on a habitable planet over the course of its habitable lifetime," said O'Malley-James, the lead author of the study.

The scientists were testing a computer model of the climates and biospheres — the overall life — of possible exoplanets.

"That was when the idea came about to run this model forward in time to see when all water and all life would disappear from the planet," O'Malley-James said.

The Sun is a middle-aged star, currently about 4.6 billion years old. In the later stages of its evolution, about 2 billion to 3 billion years from now, the Sun will grow much hotter, leading to much higher surface temperatures on the future Earth and thus far harsher environments for any last life to grow and survive on the planet. [6 Most Places for Alien Life in the Solar System (Countdown)]

The research team modeled the biosignature gases Earth's biosphere would generate up to 2.8 billion years from the present.

"The most exciting thing about these results is that they suggest that we could potentially detect the presence of life on a planet even at the very end of its habitable lifetime, when the diversity of life and population sizes are considerably reduced compared to what we see on Earth today," O'Malley-James toldAstrobiology Magazine.

The death of Earth's biosphere as it exists today would start with plants dying off. Rising temperatures cause silicon-loaded rocks known as silicates to wear away, increasing their absorption of carbon dioxide. The resulting drop in atmospheric carbon dioxide, which plants need in order to generate energy from sunlight, would eventually bring an end to the age of plants.

The extinction of plants would both curtail atmospheric oxygen levels and remove the primary source of food from most ecosystems, leading to the simultaneous extinction of animals, from large vertebrates to smaller ones, with invertebrates having the longest stay of execution. All in all, the researchers calculated Earth's surface would become largely uninhabitable between 1.2 billion and 1.85 billion years from the present.

The scientists calculated the extinction of higher plants would lower atmospheric oxygen and ozone levels to concentrations undetectable by astronomers by about 1.11 billion years from now. Still, this drop in oxygen could mean levels of the volatile compound isoprene could build up in the air, potentially serving as a biosignature until plants go extinct. Isoprene is a biological substance that normally has a very short lifetime in the atmosphere, since it quickly reacts with oxygen.

The death of plants and animals would also generate large amounts of decaying matter that would release compounds such as methanethiol into the atmosphere. This gas is only known to come from biological sources — although sunlight rapidly breaks this gas down, the resulting gas, ethane, could serve as a potential biosignature until all plants and animals go extinct. [Extreme Life on Earth: 8 Bizarre Creatures]

Methane could also be a biomarker when all other biomarker gases become undetectable in a dying planet's atmosphere. In fact, far-future levels of methane in Earth's atmosphere could be 10 times higher than the present — methane-producing bacteria get more of the carbon dioxide they need as fuel because plants are no longer there to remove the carbon dioxide. Still, the researchers caution life is not the only source of methane — volcanoes and chemical reactions involving volcanic rocks can generate the gas as well.

The scientists also conjecture that clouds might serve as homes to potential biosignatures on a dying planet. Once the planet's surface becomes too hot to live, microbes could find refuge in the clouds — microorganisms are known to exist in Earth's atmosphere today, although it remains uncertain whether they are just passing through before falling back down or whether they actively live in the sky. Airborne microorganisms could help generate unexpectedly large cloud droplets in the atmospheres of arid planets, the researchers say. In addition, vegetation could serve as a detectable biosignature until higher plants go extinct — leaves cause a red edge to appear in the spectrum of light reflected off Earth.

One major confounding factor into how a dying alien planet might look could be the influence of extraterrestrial intelligence.

"Intelligent life is difficult to factor in when making these kind of predictions," O'Malley-James said. "It's certainly possible that intelligent life could play a role in mitigating these changes to the far-future environment, perhaps by some form of geoengineering [artificial changes to the land, sea or air], or even moving the planet out to orbit in a cooler position. Predicting what that would do to a planet's biosignatures would be quite a challenge, but it may simply make the planet's biosphere appear younger than we would expect given the age of the planet."

All in all, when astronomers start finding habitable-zone planets circling older stars, "it will be useful to know if we could expect to see any signs of life and, if we can, what signatures that life might leave for us to detect, because the biosphere on a dying planet would be very different to the life we are familiar with on Earth today," O'Malley-James said.

The next step with this avenue of research is to start applying it to real examples astronomers have discovered of older, habitable-zone planets around Sun-like stars, O'Malley-James said. "There are not very many of these yet, so this may involve some modeling of theoretical planets around chosen nearby examples of older stars," he noted. "It's likely that these worlds would not be nice exact copies of Earth, so this may impact the timeline of events that lead up to the end of life on that particular planet."

O'Malley-James is also investigating whether Mars could serve as a template for an alien planet that has reached the end of its habitable lifetime — "in this case, by becoming cold and dry," he said. The researchers would adapt their existing computer model "to simulate Mars and populate all the potentially habitable regions on the planet with microbes that could live there, with the aim of adding to the suite of possible biosignatures for dying biospheres."

O'Malley-James and his colleagues detailed their findings in the International Journal of Astrobiology.