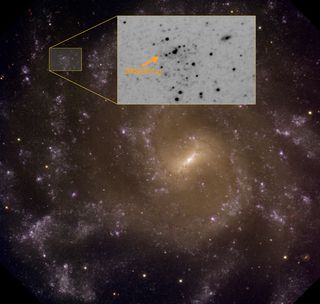 The supernova SN 2001ig (inset) sits in the outer fringes of the galaxy NGC 7424, seen here in an image taken by the Gemini South Telescope in the constellation Grus.
(Image: © Gemini South GMOS.S. Ryder/T. Rector.)

A star once hidden by a stellar death shroud is the source of odd behavior of its companion supernova, a new study has found.

The find has laid to rest lingering questions over how the supernova, known as SN2001ig, seemed to change its cosmic stripes within weeks while astronomers looked on.

"It was quite satisfying to be able to hold up a picture and see that there was a companion star right where we predicted," said Stuart Ryder, an astronomer with the Anglo-Australian Observatory in Sydney, Australia, in a telephone interview.

Ryder and his team suspected a companion star was to blame for SN2001ig's shift from a hydrogen-rich supernova, known as a Type II, to a Type I variety devoid of detectable hydrogen, based on previous radio observations. But it was only after debris from the initial stellar explosion cleared that the star's existence, and its likely role in stripping hydrogen from the supernova, were confirmed by optical observations.

SN2001ig sits about 37 million light-years from Earth in the outer fringe of the galaxy NGC 7424, which can be found in the southern constellation Grus (the Crane). Its companion star as a yellow-green color and a mass of between 10 and 18 times that of the Sun, researchers said. The star appears to make its closest pass by the supernova every 40 years, they added.

Astronomers hope the companion star's presence may help them better define the evolution and aftermath of supernova explosions, and may even link regular stellar explosions with their much more powerful hypernova cousins.

"It may be that ... if there's a companion star, it's not just an innocent bystander," Ryder told SPACE.com. "It could actually play a role in helping to potentially speed up the evolution of the mass of the star which then explodes sooner than it might have done."

Ryder and his team used the Gemini South Telescope in Chile to find SN2001ig's companion star. Their findings are detailed in this week's online issue of Monthly Notices of the Royal Astronomical Society.

Only a few such transition supernovae, dubbed Type IIb by astronomers, have been identified, with SN2001ig joining a select group of objects.

It is only the second Type IIb supernova caught on camera - a supernova dubbed SN1993J was the first - and the first-ever recorded by complete ground-based observations, researchers said. SN1993J was imaged using the Hubble Space Telescope and one of the two Keck telescopes atop Hawaii's Mauna Kea, they added.

"We always like to categorize things and put hem into a box," Ryder said of supernovae. "And it's the things that jump from one box to another that are potentially the most interesting because they tell you maybe we don't understand these things as well as we though we did."

Ryder and his team began monitoring the exploded star with the Australia Telescope Compact Array, a radio telescope based in eastern Australia, and found that the debris around SN2001ig was more clumped than expected. That lumpy arrangement hinted at the existence of a companion star locked in an eccentric orbit around SN2001ig, sweeping up the supernova's debris into a spiral-like pattern.

"It's very weird to see that kind periodic behavior and that's what gave us the main clue that maybe this was a companion system," Ryder said.

The next step, Ryder said, is to refine the stellar companion's mass estimates and determine its characteristics.

"Then [we'll] see if we can pin down exactly what type of star it is and also, possibly, whether it might been changed by its interaction before its companion star exploded," he said. "There's still more to be learned yet."