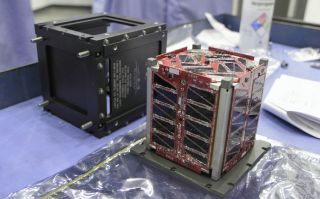 This tiny cubesat, dubbed TJ3Sat, is set to launch into space on Nov. 19, 2013. It will be the first satellite designed and built by high school students to be sent into orbit.
(Image: © Orbital Sciences)

Update for 8:52 pm ET, Nov. 19: Tonight's Minotaur 1 rocket launch has successfully launched into orbit with a record 29 satellites aboard, including NASA's PhoneSat 2.4 and the TJ3Sat. Read the full story: Dazzling Nighttime Rocket Launch Puts 29 Satellites In Orbit, a New Record

The first satellite designed and built by high school students will blast into space along with a so-called "PhoneSat" built by NASA on Tuesday night (Nov. 19). The two tiny spacecraft and 27 other small satellites are hitching a ride on a rocket launching from Virginia that could be visible from large stretches of the East Coast, weather permitting.

An Orbital Sciences Minotaur 1 rocket carrying student-built TJ3Sat satellite and more will lift off from NASA's Wallops Flight Facility on Wallops Island, Va., during a two-hour launch window that opens Tuesday night at 7:30 p.m. EST (0030 Nov. 20 GMT). If the skies are clear, the launch may be visible to millions of observers on the U.S. East Coast.

You can also watch the nighttime launch live online here, courtesy of NASA, beginning at 6:30 p.m. EST (2330 GMT). [How to See It: East Coast Visibility Maps for the Nov. 19 Rocket Launch]

Tuesday's launch is run by the U.S. military's Operationally Responsive Space office and is known as ORS-3. The main payload is the Air Force's STPSat-3, but the Minotaur 1 rocket will also deploy a record-setting 28 other cubesats including TJ3Sat, which was designed, built and tested by students at the Thomas Jefferson High School for Science and Technology in Alexandria, Va.

Nanosatellites like some of the ones launching Tuesday crib their technology from "off-the-shelf" smartphones, which are already equipped with features such as fast processors, sensors, GPS receivers and high-resolution cameras. The result is low-cost and tiny, but powerful, spacecraft.

The student-made satellite is just 3.9 x 3.9 x 4.5 inches (10x10x12 centimeters) and weights only 2 lbs. (0.89 kilograms), according to officials with Orbital Sciences, which supported the project.

As TJ3Sat orbits Earth, students and amateur radio users on the ground will be able to exchange data with the satellite. The small spacecraft is outfitted with a phonetic voice synthesizer, which can convert text to voice and transmit those sounds back to Earth over ham radio frequencies. Data from the project will be made publicly available, Orbital officials said.

The TJ3Sat satellite demonstrates how the size and accessibility of nanosatellites provides new opportunities for innovation and student participation, officials said.

"It used to be that kids growing up wanted to be an astronaut," Andrew Petro, program executive for small spacecraft technology at NASA, said in a statement. "I think we might be seeing kids saying, what they want to do is build a spacecraft. The idea here is that they really can do that."

Tuesday's launch will also mark NASA's second PhoneSat mission of the year. A trio of NASA smartphone satellites named Alexander, Graham and Bell was carried into space in April during the inaugural test flight of Orbital Sciences' Antares rocket.

Those three satellites, which were only operational for about a week, signaled "the first baby step" for the PhoneSat program, said Bruce Yost, the program manager for NASA's Small Spacecraft Technology Program at the Ames Research Center in Moffett Field, Calif. The new PhoneSat launching Tuesday night is dubbed PhoneSat 2.4.

"The PhoneSat 2.4 will be at a higher altitude and stay in space for a couple of years before re-entering," Yost added. "So we'll be able to start collecting data on the radiation effects on the satellite and see if we run into anything that causes problems."

Petro told reporters at Kennedy Space Center in Florida on Sunday that a fleet of smartphone-powered satellites could be useful for observations of space weather and measurements of the Earth's magnetic field.

"[By] taking the same measurements at the same time in many different places and gathering that information, we may learn a lot of things that we can't learn even with very sophisticated large spacecraft," Petro told SPACE.com. "It doesn't eliminate the need for big, complex satellites — there's still a need for that type of thing — but this fills another type of role that we haven't really been able to do before."

Petro added that NASA has no plans to ask tech manufacturers to make a phone specifically for a mission to space.

"The whole idea is to use the one they already made," Petro told reporters. "We're just going to take this as far as we can."

Among the other small satellites launching Tuesday is a cubesat called Firefly, which will study atmospheric effects of lightning for the U.S. National Reconnaissance Office (NRO). There's also the Vermont Lunar CubeSat, which was built by researchers at Vermont Technical College and aims to help develop the prototype technologies for a smartphone-powered satellite that could one day be launched to the moon.

Editor's note: If you snap an amazing photo of Tuesday night's launch, or any other night sky view, and you'd like to share it for a possible story or image gallery, please send images and comments to managing editor Tariq Malik at spacephotos@space.com.