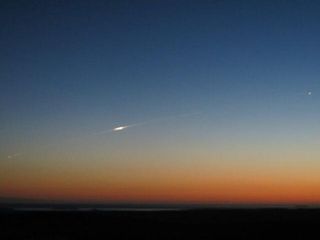 This photo of the GOCE satellite reentering the atmosphere was taken from the Falkland Islands on Nov. 11, 2013.
(Image: © Bill Chater)

The fiery plunge of a European satellite that fell to Earth earlier this month was captured on camera.

A man named Bill Chater snapped an image of the European Space Agency's (ESA) doomed GOCE spacecraft streaking across the sky above the Falkland Islands, near the tip of South America, at 9:20 p.m. local time on Nov. 11.

"Driving southwards at dusk, it appeared with bright smoke trail and split in 2 before splitting again into more and going on north," Chater wrote in a post on Twitter.

The gravity-mapping GOCE satellite ended its mission last month after it ran out of the xenon fuel needed to keep it aloft in a low orbit above Earth.

ESA officials were not certain where the 350 million euro ($467.8 million) spacecraft would land when it made an uncontrolled fall back to Earth. But no damage was reported after the satellite reentered the atmosphere while on a flight path that would take it over Siberia, the Western Pacific Ocean, the eastern Indian Ocean and Antarctica, ESA officials said.

Billed as the "Ferrari of space" because of its sleek design, the spacecraft measured about 17 feet (5.3 meters) long and 3.2 feet (1 m) wide, and weighed about 2,425 pounds (1,100 kilograms). While most of the satellite was expected to burn up during its reentry into the atmosphere, an estimated 25 percent reached Earth’s surface, ESA officials said.

GOCE is hardly the first spacecraft to plummet to Earth in an uncontrolled reentry. Past prominent examples include NASA's defunct Upper Atmosphere Research Satellite, which fell to Earth over the Pacific Ocean in 2011. And to date, these objects haven’t hurt any people on the ground.

"In the 56 years of spaceflight, some 15,000 tons of man-made space objects have re-entered the atmosphere without causing a single human injury to date," Heiner Klinkrad, the head of ESA's Space Debris Office, said in a statement.

GOCE, which is short for Gravity Field and Steady-State Ocean Circulation Explorer, launched in March 2009. Among the accomplishments of its successful missions, the spacecraft mapped Earth's lumpy gravitational field with unprecedented precision and produced the first high-resolution view of the boundary between the planet's crust and mantle.