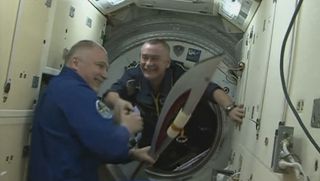 There are still months remaining before the 2014 Olympic Games kick off, but nine space travelers on the International Space Station are already getting into the Olympic spirit.

Astronauts and cosmonauts four different countries took part in a weightless version of an Olympic relay "run"  this week after three new residents brought the Olympic torch to the space station as part of the lead-up to the Winter Olympic in Sochi, Russia next year, station crewmembers said today (Nov. 8). Meanwhile, two cosmonauts will take the Olympic torch outside the space station on Saturday in a first-ever Olympic spacewalk.

The red and silver aluminum torch for the 2014 game arrived at the station with Russian cosmonaut Mikhail Tyurin (who carried it), NASA astronaut Rick Mastracchio and Japanese astronaut Koichi Wakata when their Russian Soyuz spacecraft docked with the orbiting outpost early Thursday (Nov. 7) morning. [Photos: Olympic Torch Launches into Space]

The nine astronauts on the station said they handed off the torch to one another while floating through the modules of the station.

"Mikhail Tyurin was the first person that entered the International Space Station with the torch," Russian cosmonaut Fyodor Yurchikhin told reporters through a translator earlier today (Nov. 8) during a news conference. "After that, every crewmember held the torch in his or her hands and each of us flew through the station, starting with the Japanese module by Koichi."

Wakata passed off the torch to European Space Agency astronaut Luca Parmitano, who flew through the European module with it. Parmitano then handed it over to NASA's Mike Hopkins. Hopkins gave the torch to NASA astronaut Karen Nyberg, and she passed it to Mastracchio. Tyurin took it over after that, passing it on to cosmonaut Sergey Ryazanskiy, who then gave it to his fellow cosmonaut Oleg Kotov, Yurchikhin said.

"In the end, I secured it in the Russian segment in a special place," Yurchikhin added.

"As people get together and have good communication and do their best to expand their capabilities [during the Olympics], space exploration is very similar," Wakata said. "I am very happy to be part of it."

The Olympic torch will come back to Earth with Nyberg, Yurchikhin and Parmitano when they undock their Soyuz from the space station Sunday (Nov. 10) night. The three returning station crewmembers are wrapping up a five and a half month stay onboard the orbiting laboratory.