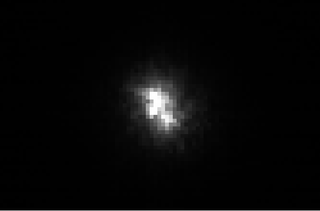 NASA's newest moon orbiter is beaming data to Earth via a powerful laser beam to test an innovative interplanetary communications systems that doesn't rely on radio waves, and a new photo reveals just what a moon laser signal looks like in infrared.

The recent image released by the European Space Agency shows a laser signal from the LADEE moon probe received by the agency's as seen by its ground station on the island of Tenerife, Spain, off the west coast of Africa. The LADEE probe beamed the laser signal across 248,548 miles (400,000 kilometers) to reach Earth from its position in lunar orbit.

LADEE is (the name is short for Lunar Atmosphere and Dust Environment Explorer andpronounced "laddie") is an 844-pound (383 kilograms) spacecraft that launched from NASA's Goddard Space Flight Center's Wallops Flight Facility in Virginia on Sept. 7 and arrived in orbit around the moon last month. [How LADEE's Space Laser Comm System Works (Infographic)]

As part of its science missions, LADEE will investigate the moon's transient atmosphere, its mysterious levitating dust particles and its surface conditions. But the probe is also equipped with a communications demonstration, a system that employs laser technology instead of radio wave transmissions, which could help scientists send and retrieve data from distant spacecraft in the future.

LADEE recently set a record for the fastest download rate between the moon and Earth, sending data 239,000 miles (384,633 kilometers) home at the relatively speedy download rate of 622 megabits per second. A NASA station at White Sands, New Mexico, picked up the signal — the first-ever laser transmission from lunar orbit.

The data received by ESA's facility came in at a slower rate of 40 megabits per second, but that's still several times faster than a typical home broadband connection, ESA officials said.

"We acquired the first signals from LADEE on 26 October, and since then, we've had a series of optical uplinks and downlinks providing extremely fast laser communications," Zoran Sodnik, ESA’s project manager for the laser effort, said in a statement.

ESA officials say they are investigating some initial difficulties they had with the laser communication system will test uplink communications at 20 megabits per second and take "time-of-travel" measurements to calculate the spacecraft's orbit.

"We are already confident that the test campaign will confirm the practicality of high-data-rate optical links for future missions," the agency's Klaus-Juergen Schulz, who is responsible for ground station systems at the European Space Operations Center, in Darmstadt, Germany, said in a statement.

The orbiter is also transmitting to a third station, at NASA's Jet Propulsion Laboratory in Pasadena, Calif.