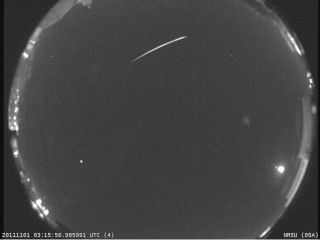 For the next week or so, if you happen to catch a glimpse of a bright yellow-orange or ruddy hued "shooting star," you might have just seen a Taurid meteor.

The annual Taurid meteor shower shows up like clockwork every year between the middle of October and the middle of November, but Nov. 5 to 12 will be the best time to look for them as they reach a broad maximum.

Initially, the moon will not be a problem. On Nov. 5, the moon will be a slender crescent that will set before 7 p.m. local time.  Each night, the moon will get a little wider and a little brighter and sets about an hour later.  But even by Nov. 12 when the moon has grown to a very bright gibbous phase, it will set around 1:30 a.m. leaving the rest of the night dark for meteor viewing. [Best Stargazing Events of November 2013 (Gallery)]

Moon not a big problem

Under clear, dark skies, some 10 to 15 Taurids may appear per hour. They are often yellowish-orange and, as meteors go, appear to move rather slowly.

Their name comes from the way they seem to radiate from the constellation Taurus, the Bull, which sits low in the east a couple of hours after sundown and is almost directly overhead by around 1:30 a.m. Even on Nov. 12, the bright moon will depart the scene just as Taurus is reaching its highest point in the sky.

Meteors — popularly referred to as "shooting stars" — are generated when debris enters and burns up in Earth’s atmosphere.

In the case of the Taurids, the cosmic litter is attributed to debris left behind by periodic Comet Encke, which is currently passing through the inner solar system. The Taurid debris stream also contains some noticeably larger fragments than those shed by other comets. When these smaller bits pass through Earth's atmosphere, they occasionally create a few unusually bright meteors known as "fireballs."

The Taurids are actually divided into the Northern Taurids and the Southern Taurids. This is an example of what happens to a meteor stream when it grows old.

A slight divergence between the orbits of the two debris streams accumulates with time and planetary bodies and the sun have some gravitational control over the orbits of the particles. Because the positions of the planets are constantly changing, the particles pass nearer to them on some revolutions than others — diverting parts of the stream, fanning it out and splitting it.

What was originally one stream diffuses into a cloud of minor streams and isolated particles in individual orbits, crossing Earth's orbit at yet more widely scattered times of the year and coming from more scattered directions. The debris is stirred into the general haze of dust in the solar system.

According to Margaret Campbell-Brown and Peter Brown in the 2013 edition of the Observer’s Handbook of the Royal Astronomical Society of Canada, the Southern Taurids reach maximum on Nov. 5 and the Northern Taurids reach their peak a week later on Nov. 12. The two radiants lie just south of the Pleiades star cluster.

So during the next week, if you see a bright, slightly tinted orange meteor sliding rather lazily away from that famous little smudge of stars, you can be sure it's a Taurid — a piece of Encke’s comet.