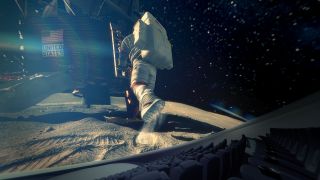 A new film about moon exploration enlists a heavy hitter to take viewers along for the ride — the voice of spaceman Buzz Lightyear from the "Toy Story" movies.

Actor Tim Allen will narrate a new 25-minute film called "Back to the Moon for Good," which recounts the history of lunar exploration efforts and previews the coming robotic rush to Earth's nearest neighbor unleashed by the $30 million Google Lunar X Prize.

"Although the benefits of going back to the moon are well known within the space community, the mission of this film — and the Google Lunar X Prize — is to re-ignite an interest in space exploration amongst people of all ages," X Prize Foundation president Robert Weiss, who is an executive producer of the movie, said in a statement.

"As such, we needed a narrator who is recognizable, accessible and resonates with all audiences. Tim Allen’s illustrious career and persona make him the best fit to take our message 'to infinity and beyond,'" Weiss added, referencing Buzz Lightyear's famous catchphrase.

The Google Lunar X Prize challenges privately funded teams to land a robot on the surface of the moon, have it travel at least 1,650 feet (500 meters), and send data and images back to Earth.

The first team to accomplish these goals by the end of 2015 will receive the $20 million grand prize. An additional $10 million is set aside for second place and various special accomplishments, such as detecting water, bringing the prize's total price tag to $30 million. At the moment, 22 teams remain in the running.

"Back To The Moon For Good" features interviews with some of the teams vying to win the competition. It also features a virtual moon mission, complete with launch, landing and a tour of the lunar surface. The film ends with a visualization of a future moon colony, X Prize officials said.

More information about "Back to the Moon for Good," including a map of the locations where it will be showing, is available here: http://www.googlelunarxprize.org/education/domeshow