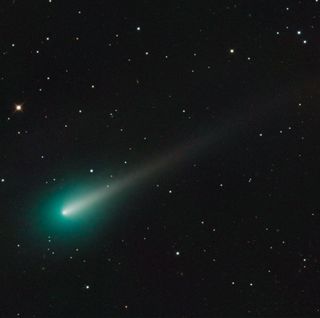 The much-anticipated Comet ISON is now within sight of amateur astronomers as it plunges toward the sun. And the National Science Foundation (NSF) is appealing to the public for pictures of the icy wanderer, which could put on one of the brightest comet shows in years.

The NSF's Division of Astronomical Sciences, along with Astronomy magazine and Discover magazine, is holding a photo contest for images of Comet ISON, with cash prizes worth up to $2,500. The winning images will also be published in Astronomy magazine.

A pair of Russian amateur astronomers first spotted Comet ISON in September 2012. Ever since then, scientists and skywatchers alike have been tracking the sungrazer's progress.

The comet will make its closest approach to the sun on Nov. 28 — Thanksgiving Day in the United States — passing within 730,000 miles (1.2 million kilometers) of the solar surface. Some astronomers had predicted the icy body would break up before then, but recent photos of Comet ISON by the Hubble Space Telescope suggest that it has remained largely intact during its trip into the inner solar system.

You can read more about how to submit your photos to the NSF here: http://www.nsf.gov/news/special_reports/cometchallenge/