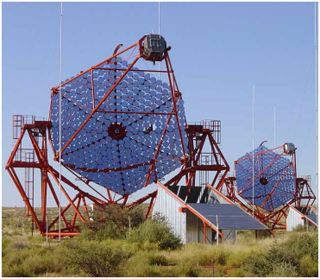 We live in a universe filled with light, but astronomers have long wondered how much of the light comes from visible stars and galaxies, and how much of it is near-infrared afterglow leftover from the early days of the universe.

Now, a team of researchers led by scientists at the Max Planck Institut has developed a way to tease apart these two types of light.

The finding could help astronomers better calculate the amount of light produced by the universe's the first stars, which has important implications for models of how the universe developed.

The universe's near-infrared light comes from a combination of observable galaxies and stars and also very ancient objects like the first stars ever formed. The sum of this light, which is the light emitted from all objects throughout the universe's history, is called the extragalactic background light (EBL).

In addition, "foreground light" is emitted by dust in the solar system, which radiates light in the same wavelength and makes it difficult for scientists to figure out how much light comes from each source.

The trick is to measure the star light in the space between galaxies, where there is no foreground light.

In a study detailed in the April 20 issue of Nature, the researchers looked at the emission from two blazer galaxies roughly two billion light-years from Earth. Blazars produce high-energy radiation from very violent processes.

The gamma rays produced by blazers become slightly dimmed as they make their way to Earth. The researchers installed four large telescopes in the grasslands of Namibia in 2004 to these detect faint flashes of blue light emitted when high-energy gamma rays hit our atmosphere.

Since then, they have accumulated over 80 hours of observation on the two blazars. By considering the maximum possible brightness of each blazar, the researchers were able to estimate the dimming of their emitted gamma rays.

Knowing the amount of dimming makes it possible for scientists to estimate the EBL between the blazar and Earth and thus figure out the amount of starlight.

Through this process, the study concludes that most of the EBL comes not from the earliest stars but from the local galaxies, a group of about 30 galaxies that includes our galaxy, the Milky Way.