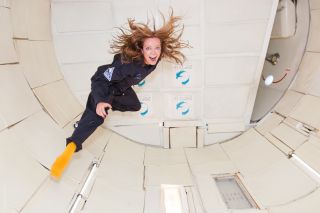 Virgin Galactic customer Joanne Le Bon got a taste of weightlessness aboard a ZERO-G flight in September 2013.
(Image: © Steve Boxall)

It may be at least a year before Virgin Galactic's future passengers fly to suborbital space, but some of them recently got a chance to experience weightlessness on a ZERO-G flight.

Officials at Zero Gravity Corporation said 80 Virgin Galactic customers flew on chartered trips aboard their G-FORCE ONE plane during two flights on Sept. 26 and one on Sept. 27 in Burbank, Calif. The three ZERO-G flights coincided with a gathering of Virgin Galactic's paying space tourists on Sept. 25 in the Mojave Desert.

ZERO-G'S plane is a modified Boeing 727 jet that flies up and down on a parabolic path to create the experience of weightlessness in 30-second intervals. Riders can float around the cabin as if they were in space during these brief periods of weightlessness. [Photos: Virgin Galactic's 1st SpaceShipTwo Powered Flight Test]

"It's an utterly amazing feeling to be floating in zero-G. It's literally out of this world!" Joanne Le Bon, a Virgin Galactic customer and ZERO-G flyer, said in a statement.

Le Bon is one of more than 640 people who have put down a deposit to fly with Virgin Galactic, Richard Branson's commercial spaceflight company. Passenger flights are expected to begin in 2014. The current price for a ride is about $250,000.

During these commercial flights, Virgin Galactic's SpaceShipTwo will take off from Spaceport America in New Mexico, carried by a mothership plane called WhiteKnightTwo. Once the linked planes reach an altitude of about 50,000 feet (15,000 meters), the spaceship will be released and its rocket engine will kick in, launching it into suborbital space. Virgin Galactic passengers will get to climb out of their seats and experience weightlessness during the flight, all while glimpsing a rare view of the limb of Earth against the backdrop of black space. SpaceShipTwo can seat two pilots and six passengers.

An individual ZERO-G flight typically costs about $5,000. The company and Virgin Galactic are apparently looking into future partnerships.

"We are excited about this new relationship and look forward to introducing even more Virgin Galactic Future Astronauts to the amazing feeling of weightlessness," Terese Brewster, president and COO of ZERO-G, said in a statement. "These flights are definitely an enhancement to their upcoming trip on SpaceShipTwo."