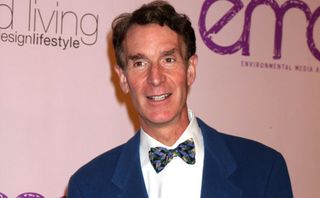 Bill Nye the Science Guy is bringing his weird brand of science to a popular TV show and, so far, it seems to be paying off. The head of the Planetary Society best known for his educational TV show that aired from 1993 to 1998 has made it safely through the first round of eliminations on ABC's "Dancing With the Stars."

On Sept. 16, Nye danced the cha-cha to the song "Weird Science," originally performed by Oingo Boingo. While the judges awarded Nye the lowest week one scores in the competition, his popularity with fans earned him the points necessary to stay safe from elimination last night (Sept. 23). After his raucous performance complete with laboratory gear, a lab coat and a science-themed stage, the audience gave the gangly scientist a standing ovation while chanting "Bill! Bill! Bill!" harkening back to the theme song from his 1990s TV show.

"This might be the best example in history of beauty and the geek," Nye said of his pairing with dance partner Tyne Stecklein during an introduction before their dance. During the introduction, the science educator also taught Stecklein the difference between a beaker and a flask — a flask has a neck while a beaker does not. Watch Nye dance the cha-cha in the window below:

"Dancing With the Stars" airs Mondays on ABC at 8 p.m. EDT.