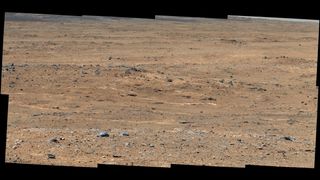 An outcrop visible as light-toned streaks in the lower center of this image has been chosen as a place for NASA's Mars rover Curiosity to study for a few days in September 2013. The pause for observations at this area, called "Waypoint 1," is the first during the rover's trek of many months from the "Glenelg" area where it worked for the first half of 2013 to an entry point to the lower layers of Mount Sharp. This pale outcrop is informally named "Darwin." Image released Sept. 10, 2013.
(Image: © NASA/JPL-Caltech/MSSS)

NASA's Mars rover Curiosity has made its longest Martian drive yet as it trucks along on the Red Planet.

Curiosity performed its longest one-day drive on Sept. 5, putting it within striking distance of an interesting patch of rocks called Waypoint 1, NASA officials said in a mission update today (Sept. 10). Arriving at Waypoint 1 will place the rover about one-fifth of the way to its ultimate destination: a 3-mile-high (5 kilometers) mountain dubbed Mount Sharp.

During the long drive, Curiosity traversed 464 feet (141.5 meters) to the top of Panorama Point where it took photos of the pale outcrop that is Waypoint 1. As of Monday (Sept. 9), the car-sized rover was about 245 feet (75 m) away from the checkpoint, according to NASA officials. [See the latest Mars photos by the Curiosity rover]

"We had a long and unobstructed view of the hill we needed to climb, which would provide an overlook of the first major waypoint on our trek to Mount Sharp," said rover mission planner Jeff Biesiadecki, of NASA's Jet Propulsion Laboratory in Pasadena, Calif., in a statement. "We were able to extend the drive well beyond what we could see by enabling the rover's onboard hazard avoidance system."

A NASA spacecraft in orbit around the Red Planet helped to map out Curiosity's approximately 5.3-mile (8.6 km) path to Mount Sharp. Scientists used imagery collected by the Mars Reconnaissance Orbiter to choose Waypoint 1 as a target for Curiosity. Once the rover reaches the milestone it will pause for a few days to sample the area with its arm, NASA officials explained.

Scientists want to sample the waypoints Curiosity comes across during its journey to put together a map of the Martian environment.

"We want to know how the rocks at Yellowknife Bay are related to what we'll see at Mount Sharp," Curiosity's project scientist John Grotzinger, of the California Institute of Technology, said in a statement. "That's what we intend to get from the waypoints between them. We'll use them to stitch together a timeline — which layers are older, which are younger."

In an earlier drive this summer, the 1-ton Curiosity rover got to use its own navigation system to traverse an area not vetted by its handlers back on Earth beforehand. The rover used its autonomous navigation system to drive about 33 feet (10 m) out of its 141 foot (43 m) for the trip.

NASA's $2.5 billion Curiosity rover landed inside the vast Gale Crater on Mars in August 2012 to determine if the planet could have ever been habitable for microbial life in its past. In March of this year, scientists announced that an area near the landing site called Yellowknife Bay was capable of supporting microbial life billions of years in the past.