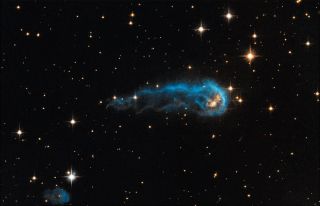 The caterpillar-shaped knot, called IRAS 20324+4057, is a protostar in a very early evolutionary stage. It is still in the process of collecting material from an envelope of gas surrounding it.
(Image: © NASA, ESA, the Hubble Heritage Team (STScI/AURA), and IPHAS)

The Hubble Space Telescope has captured what scienitsts are describing as a "cosmic caterpillar" nearly 6 trillion miles long slinking through deepspace.

The celestial critter in the new Hubble telescope photo is actually a cloud of gas stretching one light-year (10 trillion kilometers) across, scientists say. This cloud is in the process of collapsing down under its own gravity to give birth to a star — but it's a race against time, because the established bright stars in its vicinity are fighting this process.

There are 65 extremely hot, bright stars lurking nearby the cloud, visible on the right side of the image. A powerful stellar wind is blowing out from these stars, as well as 500 less bright companions nearby, gradually eroding the caterpillar cloud.

The cloud is fighting back, too, though, bulking up over time by collecting material surrounding its outer envelope. Whether the caterpillar will gather enough mass to counteract the erosion is unclear. "Only time will tell if the formed star will be a 'heavy-weight' or a 'light-weight' with respect to its mass," NASA scientists wrote in a statement.

The new image is a composite of two photographs. One was captured in green and infrared light by the Hubble Advanced Camera for Surveys in 2006. The other comes from the ground-based Isaac Newton Telescope, which took the data in 2003 under a project called the INT Photometric H-alpha Survey. The composite image was released Aug. 29 by the Hubble Space Telescope team.

The Hubble Space Telescope was launched to orbit on the space shuttle Discovery in 1990, and after five visits from repair crew astronauts, Hubble's still going strong.