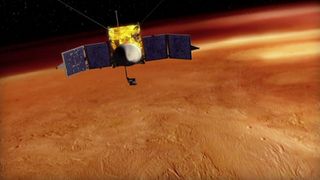 BOULDER, Colo. — Scientists are gearing up for NASA's next spacecraft to Mars, an orbiter equipped to probe the Martian upper atmosphere for clues to how the Red Planet's atmosphere has thinned and how Mars' climate has evolved over time.

The Mars Atmosphere and Volatile EvolutioN mission, called MAVEN for short, will address the question of where the planet's once-thicker atmosphere — and long ago flowing water — went. Playing the role of detective, the spacecraft is expected to deliver puzzle pieces that will help scientists discern the astrobiological potential for life on Mars in the past, and perhaps even today.

MAVEN was the key focus of a 2013 New Media Practitioners Professional Development Workshop, held here Aug. 23-25 at the University of Colorado Boulder's Laboratory for Atmospheric and Space Physics (LASP). MAVEN is due to launch aboard an Atlas 5 rocket from Florida's Cape Canaveral Air Force Station later this year. [Maven's Mission to Mars: Images]

"We're in the final stage of preparing for launch," said Bruce Jakosky, principal investigator for MAVEN at LASP and director of the university's Center for Astrobiology. "All of the science instruments are complete and on the spacecraft. We are on schedule and we are on budget."

MAVEN's launch window is Nov. 18 to Dec. 7. But thanks to the spacecraft retaining a low mass, an additional 12 to 13 days beyond the close of Dec. 7 is also available, Jakosky said.

"We want to have as much opportunity there as possible, because if we miss the launch period, it's 26 months before we get to do it again" Jakosky said. (That's how long it will take for Earth and Mars to once again reach the necessary alignment.)

Given a Nov. 18 departure date, and a 38-minute propulsive burn once it reaches Mars, MAVEN would swing into Mars orbit on Sept. 22, 2014.

With its outstretched solar wings, each tipped by a magnetometer, MAVEN is about the same length as a school bus, roughly 37 feet (11 meters).

Once on location, MAVEN will undergo five and a half weeks of a "transition phase" to set up for the start of scientific work, Jakosky said.

Armed with science instruments, MAVEN is prepared to, among other investigations, find out how much of the atmosphere of Mars and volatiles have been lost to space over time. Studying the current state of the planet's upper atmosphere, ionosphere and interactions with the solar wind is also high on the agenda.

"It's the simultaneity of measurements that's really the key to the MAVEN analysis," Jakosky said. No doubt, there's lots of room for surprise findings, he added.

Putting on his astrobiological hat, Jakosky said that by assaying the processes through which the top of the Martian atmosphere can be lost to space, scientists could better understand the changes in the climate of Mars over the last 4 billion years. That, in turn, means MAVEN might deliver insight into whether microbes could have survived on Mars in the past.

An extended mission for MAVEN offers "high scientific value," Jakosky said. "We designed everything for a one-year lifetime primary mission. Everything beyond that is icing on the cake." He noted the orbiter's onboard fuel could allow it to operate out to 2023.

The sun's activity level creates a bit of an uncertainty, said MAVEN science team member Janet Luhmann, a senior fellow at the Space Sciences Laboratory at the University of California, Berkeley. "We don't know how lucky we'll be," she said, but the team hopes the sun will churn out not-so-wimpy coronal mass ejections (CMEs), or outpourings of solar plasma, belching them at Mars during MAVEN's science gathering.

MAVEN should help satisfy human curiosity about both Earth's local universe and the bigger scale of things, Luhmann said. "Are we missing something in our picture of the story we're reconstructing?" Luhmann asked in an interview with SPACE.com. "That's essential. So, if nothing else, we will have constrained the question better."

The MAVEN mission offers a lot of scientific value, Luhmann said. "It opens up so many new insights, all at once." [7 Biggest Mysteries of Mars]

With MAVEN on duty at the Red Planet, the spacecraft can offer an added bonus, carrying out coordinated observations with the European Space Agency's now-orbiting Mars Express.

Curiosity's Sample Analysis at Mars (SAM) instrument is currently on the prowl for compounds associated with life, also exploring the ways in which these compounds are generated and destroyed in the Martian ecosphere.

Now a decade since the MAVEN mission was first sketched out, Jakosky is admittedly hungry to see launch day. But he has a little extra fingers-crossed anxiety about the always-risky business of rocket flight. That's because this mission's success depends on that of some other projects.

"I have had a tremendous interest in all of the Atlas launches leading up to ours," Jakosky told SPACE.com.

Next up is a United Launch Alliance Atlas 5 rocket that will take off on Sept. 18, and will toss the third U.S. Air Force Advanced Extremely High Frequency (AEHF) satellite into orbit.

"If something happens to this one, there's going to be an incredible reluctance to launch another one — that is, ours — until they fully understand the cause of the problem and fix it," Jakosky said. "The Atlas 5 has a tremendous, positive success record, so I'm optimistic it will perform well."

Nevertheless, Jakosky said he and his colleagues talk amongst themselves and agree that the business of hurling payloads into space is not for the faint of heart. Jakosky himself falls back on a quote from one of "The Godfather" movies: "This is the business we've chosen."