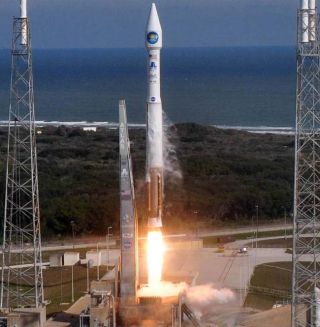 NASA has selected an Atlas 5 rocketto launch an orbiter inNovember 2013 to study the ancient climate record of Mars, the agencyannouncedThursday.

The Mars Atmosphere and VolatileEvolution, or MAVEN,spacecraft will collect the most detailed data ever obtained on the RedPlanet's atmosphere. Scientists expect MAVEN will help unravelthe mystery of how Mars transitioned from a wetter, warmerplanet to thebarren landscape of today.

The preliminary launch period, whenthe orbits of Earth andMars are properly aligned for an interplanetary journey, opens Nov. 18andcloses Dec. 7 in 2013. MAVEN will arrive at Mars in September 2014.

The total value of the launch serviceis $187 million. Thatcost includes the Atlas5rocket and additional contracts for payload processing,launch vehicleintegration, mission-unique ground support, and tracking and telemetryservices, according to a NASA press release.

The MAVENspacecraft is a downsized version of the Mars ReconnaissanceOrbiter busbuilt by Lockheed Martin Corp. The mission's cost is $438 million, notcountingthe launch services contract unveiled Thursday.