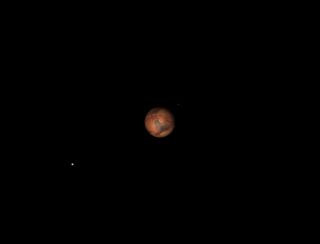 Mars is now a bright object in the morning sky. For the first three weeks of August, Mars is in Gemini, then on August 25 it moves into Cancer.
(Image: © Starry Night Software)

Mars is currently rising in the east-northeast just before 3:30 a.m. your local time. The Earth is very slowly catching up with Mars in its orbit around the sun, yet the Red Planet has not brightened much at all since early July.

The chief reason that Mars has not brightened much lately is that it is still at a rather large distance from us: 215.6 million miles (346.8 million kilometers) as of Sunday morning.  And if you have even a moderately large telescope, the disk of Mars remains disappointingly small, just 4 arc seconds across.  You would need a magnification of no less than 450-power to make Mars look as large the moon looks to us with the unaided eye.

What's really interesting about Mars is the stellar scene that it's currently passing through. The planet will form a nearly perfectly straight line with Castor and Pollux, the two brightest stars of the constellation Gemini, the Twins. On Sunday morning, the trio will align in a Mars-Pollux-Castor order, running from the southeast (lower left) to northwest (upper right).

Or, you can go in the other direction. If you extend an imaginary line through Castor and Pollux, 1.5 times the distance between them and down toward the horizon, you'll come to Mars. Mars and Castor appear of equal brightness, while Pollux is about half a magnitude brighter.

Compare the yellow-orange tint of Mars to that of Pollux — which is a deeper hue? And note that Mars does not twinkle much.

Mars won't begin to brighten noticeably until later this year in the fall. By the start of 2014, Mars will be rising in the east-southeast shortly after midnight and cross the meridian just as dawn is breaking.

The Red Planet will be closest to Earth on April 14, when it will be about 57.4 million miles (92.4 million km) away. Six days before that, however, Mars will arrive at opposition to the sun, rising at sunset, appearing in the south at midnight and setting at sunup.

Mars will also be shining at its brightest for 2014 at magnitude -1.5; that's a trifle brighter than Sirius, the brightest star in the sky!

Keep all of this in mind should you seek Mars out early on Sunday as it aligns with Gemini's "twin stars." For now, Mars is only 1/17th as bright as it will eventually be next year.

Editor's note: If you snap an amazing picture of Mars or any other night sky sight that you'd like to share for a possible story or image gallery, send photos, comments and your name and location to Managing Editor Tariq Malik at spacephotos@space.com.

Joe Rao serves as an instructor and guest lecturer at New York's Hayden Planetarium. He writes about astronomy for Natural History magazine, the Farmer's Almanac and other publications, and he is also an on-camera meteorologist for News 12 Westchester, N.Y.Follow us @SPACEdotcom, Facebook or Google+. Original article on SPACE.com.