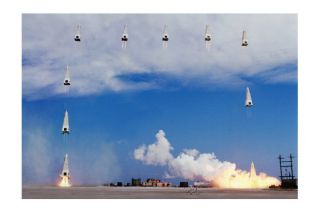 Nearly 20 years ago to the date, a pioneering reusable spacecraft called the Delta Clipper Experimental, or DC-X, made its first test flight — a low, 59-second hop over New Mexico's White Sands Space Harbor. This weekend, the novel rocket experiment finds itself in the spotlight once again.

Veterans of that experimental program and space industry leaders are gathering at at Spaceport America in New Mexico today (Aug. 16) for DC-X SpaceQuest, a celebration and conference to mark the 20th anniversary of the DC-X's first amazing flight and to discuss the future of reusable rockets.

The reusable DC-X rocket stood 39 feet (12 meters) tall and resembled a towering white traffic cone, but was never intended to reach space. It was built by McDonnell Douglas (a company that later merged with Boeing) as part of a technology demonstration program initially spurred by the Department of Defense. After the unmanned rocket made its first successful vertical takeoff and landing on Aug. 18, 1993 — which flew 150 feet (45 m) above the ground — the DC-X flew 11 more times through 1996, demonstrating that a scaled-up version of the single stage to orbit craft could potentially be used to launch routine payloads into low-Earth orbit. [Photos: NASA's Reusable DC-X Rocket Concept]

Though the program was eventually abandoned by NASA and the U.S. military, DC-X still stands out a model for efforts to build cheap, reusable spacecraft. The total amount of money spent on the program's efforts has been estimated at less than $100 million. The DC-X SpaceQuest kicks off on Friday (Aug. 16) at Spaceport America followed by more events Saturday and Sunday at the New Mexico Museum of Space History and the New Mexico State University in Alamogordo.

As part of this weekend's celebrations, the members of the original DC-X Team will be inducted into the International Space Hall of Fame, joining the ranks of Neil Armstrong, Buzz Aldrin, Nicolaus Copernicus and Valentina Tereshkova. The induction, to take place Saturday, will mark the first time an entire group of people will be honored as such.

"Every member of the DC-X team displayed the qualities required to be an inductee: imagination, achievement, and the dedication to further advance man's knowledge of the universe, and his ability to explore and develop space for the benefit of all mankind," read a statement from the New Mexico Museum of Space History. "Many obstacles confronted the DC-X team as they worked towards making the dream of aircraft-like safety for affordable space travel a reality."

Commercial space entrepreneurs are still contending with those obstacles today. The conference will feature speakers from several private spaceflight companies — including Virgin Galactic, Masten Space Systems, XCOR Aerospace and Orbital Sciences — who will discuss some of those technical challenges to the future of space travel.