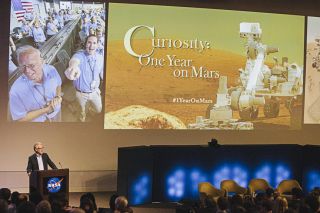 PASADENA, Calif. — It’s been a year since NASA’s Curiosity rover touched down on Mars, and the mission's science and engineering teams celebrated the occasion in style here at the space agency's Jet Propulsion Laboratory on Monday (Aug. 5).

Despite sequestration woes, participants enjoyed music, snacks and presentations on the progress of the mission to date. Curiosity chief scientist John Grotzinger gave one such update, as a jazz band composed of JPL employees played in the background.

"We’re currently on our way to Mount Sharp, which is about six or seven miles away," said Grotzinger, a geologist at Caltech here in Pasadena. "We are maybe a tenth of the way there now. It could take seven or eight months to get there, so the mission now is drive-drive-drive." [Curiosity's First Year on Mars in Two Minutes (Video)]

Mount Sharp is a huge and mysterious mountain that rises 3.4 miles (5.5 kilometers) into the sky from the center of Gale Crater, where Curiosity touched down on the night of Aug. 5, 2012. Mount Sharp has long been the ultimate science destination for Curiosity, whose mission was designed to assess Mars' past or present potential to support microbial life.

When asked how he felt about the process that got them to this point, Grotzinger was enthusiastic, citing the fact that the mission team has already determined that a site called Yellowknife Bay was indeed habitable billions of years ago.

"We’ve had a great mission," he said. "The first hole we drilled — the first hole drilled on another planet by a robot — turned up exactly what we were looking for. Having that box ticked off so soon in the mission makes us much more relaxed. We never thought it would happen so soon."

When the music stopped, Rob Manning, Curiosity's chief engineer (and principal trumpet for the jazz band, flanked by his twin brother and fellow engineer on sax), discussed the long drive to Mount Sharp.

"Those rover drivers, who have been sitting on their hands for six months, finally have their chance to put the pedal to the metal," Manning said. "We’re heading where we want to go, to the base of Mount Sharp. We have to pass this long streak of black sand dunes, but once we do, we can turn in and head towards the foothills. It’s just fantastic." [Curiosity's Most Amazing Landing Moments: A Countdown]

The black dunes are in an area described by Grotzinger as a "unit of hematite," a mineral traditionally formed in the presence of water.

"Above that are phyllosilicates, and above that are sulfates. We’d like to tap each one of those layers." Grotzinger said. These too are water-related formations, and are likely billions of years old. Prospecting them will add immeasurably to our understanding of the environmental history of Mars, he added.

"In a few months, we’ll be reaching the foothills and canyons, where all this wonderful layered terrain is. When we get up there, you’ll see the walls of these mountains on each side of you, with incredible wind-carved structures," he said. "This is an area that has been exposed to wind and the elements for hundreds of millions, if not billions, of years. So that does something to terrain, even though the atmosphere is thin, and over time you see interesting wind carved structures."

He smiled with a far-off look in his eyes. "It’s likely to be a very dramatically beautiful place."

As Manning headed over to watch fellow JPL employee Megan Richarson drive her homemade radio-controlled rover model around the facility's center quad, Al Chen, a team leader for the rover’s landing, reflected on the months since Curiosity’s harrowing and unprecedented landing, which saw the 1-ton rover lowered to the Martian surface by a rocket-powered sky crane.

"The high point for me has been the discovery that Mars was once habitable, hospitable towards life. That’s what made the whole entry, descent and landing worthwhile," Chen said. "This mission wasn’t just about landing on Mars, but finding out if it was ever suitable for life. The answer appears to be yes. "

When asked about the rest of the mission, he added, "We weren’t expecting to find as much as we did near the landing site. That was great. But the hope is we will find even bigger and better stuff up there, in the mountains."

As Chen spoke, dozens of JPL'ers were lined up at a nearby table to receive their own Hot Wheels® model of Curiosity. Another vendor handed out free Dove bars to help curb the heat of the Southern California afternoon. The music continued and the crowd continued to celebrate the achievements of Curiosity's first year on Mars.

The vibe of the afternoon was summed up by Curiosity flight controller Bobak Ferdowski, aka "Mohawk Guy," as he looked back across the past year.

"Landing was scary; I felt sick for quite a bit of it," Ferdowsi said. "And then everything worked perfectly, almost like a perfect simulation. But it wasn’t a simulation, and here we are, a year later, seeing places on Mars we have never seen and doing great science. We’re learning so much and so quickly, and now we can use this knowledge to design our next rover mission in 2020 to actually look for evidence of past life. We can start answering those new questions."

That Mars rover mission, which is slated to launch in 2020, will be based on Curiosity's chassis and landing system but will feature different science instruments. Its main goal will be to search for signs of past life, NASA officials have said.