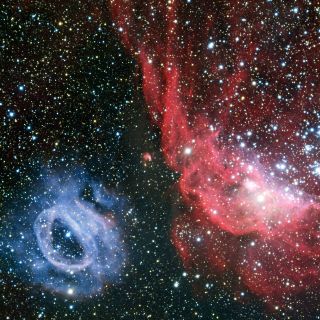 ESO's Very Large Telescope has captured a detailed view of a star-forming region in the Large Magellanic Cloud — one of the Milky Way's satellite galaxies. This sharp image reveals two glowing clouds of gas. NGC 2014 (right) is irregularly shaped and red and its neighbour, NGC 2020, is round and blue. Image released August 7, 2013.
(Image: © ESO)

An incredible new photo taken by a telescope in the Southern Hemisphere captures an odd couple shimmering beautifully in a star-forming region of a nearby galaxy.

The new photo was taken by the Very Large Telescope in Chile and shows two clouds of gas shining in blue and red in the Large Magellanic Cloud, about 163,000 light-years from the Milky Way. The European Southern Observatory, which oversees the Very Large Telescope, unveiled the image today (Aug. 6) along with a video tour of the photo of the dazzling cosmic clouds.

"The strikingly different colors of NGC 2014 and NGC 2020 are the result of both the different chemical makeup of the surrounding gas and the temperatures of the stars that are causing the clouds to glow," officials from ESO wrote in an image description. "The distances between the stars and the respective gas clouds also play a role."

The pink cloud, NGC 2014, is mostly composed of hydrogen gas. A cluster of young, hot stars emits radiation that strips electrons from the atoms in the gas, creating the red glow, ESO officials said. Stellar winds from the new stars cause the gas around them to scatter.

NGC 2020 is the blue circle of gas around the bright new star shining on the left hand side of the image. The star could be more than 10 times as hot as the surface of Earth's sun, ESO officials wrote.

"The distinctive blueish color of this rather mysterious object is again created by radiation from the hot star — this time by ionizing oxygen instead of hydrogen," ESO officials said of NGC 2020.

The Large Magellanic Cloud and its counterpart, the Small Magellanic Cloud, were named for the explorer Ferdinand Magellan. Although Magellan died in the Philippines before returning to Europe, his crew brought news of the celestial sights to the continent.