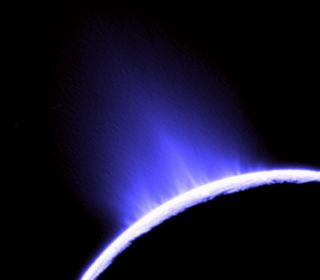 Steady geysers of water ice on one of Saturn's icy moons appear to erupt more strongly when the moon is farthest from its ringed parent planet, scientists say.

The warm vents at the south pole of Saturn's moon Enceladus emit vast plumes of water vapor and ice out into space. While these plumes have been studied for some time, scientists have now observed a correlation between the intensity of the plume and the location of the moon in its orbit around Saturn.

Using data from the Cassini spacecraft, Cornell University research associate Matthew Hedman and a team of scientists found that when the 314-mile (505 kilometers) moon nears its farthest point from Saturn, the plumes seen in the Cassini data appear brighter. This suggests that the vents in the southern portion of Enceladus are expanding, allowing more dust to escape the fissures at that point in the moon's orbit. As the moon nears its home planet, however, the vents contract, making the plumes less pronounced. [Photos: Enceladus, Saturn's Cold, Bright Moon]

"Enceladus is this very geologically active moon and there are these plumes of water vapor and ice crystals going off of its south polar region," Hedman, the author of a study appearing in the journal Nature this week, told SPACE.com. "What we found that was surprising was that depending on where Enceladus was in its orbit, those plumes, the amount of material escaping from beneath its surface actually varied quite a bit."

Hedman and his team analyzed 252 images from Cassini to characterize the dust shot out during the eruptions and track their occurrences. The brightness of the plumes increases by more than a factor of three when the moon is farthest from Saturn, Hedman said.

Scientists chalk this difference up to tidal stresses that warp the natural satellite. Enceladus experiences tidal stress because of its relationship to Saturn's moon Dione, John Spencer, a scientist at the Southwest Research Institute in Boulder, Colo., said.

"Dione is pulling in a rhythmic way on Enceladus and preventing its orbit from circularizing, which it would otherwise do," Spencer, who wrote a commentary in Nature about this research, said. "[Enceladus] is sometimes a bit closer to Saturn than at other times, and that means that the tidal stresses that Saturn imposes on Enceladus … are constantly varying, so Enceladus is continually being stretched and twisted by those forces, whereas if it were in a circular orbit, those forces would be constant and nothing would change."

These tidal forces could be responsible for heating up the interior of the moon, Spencer said. Tidal heating — the distortion of the moon's shape that produces heat through friction — could be a reason for the moon's warm interior, but that only explains part of the heat production.

The amount of heat observed coming from Enceladus is larger than what scientists expect to observe theoretically, Spencer said.

"There are certainly details to be worked out, but there is no other reason for Enceladus to be so extraordinary compared to its neighbors other than that it has tidal friction from Saturn's tides that is heating the interior," Spencer said. "We've known that for a long time, and this [research] is actually going to give us a nice handle on how that works because we're directly seeing the effects of those tides."