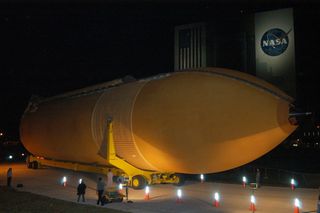 CAPE CANAVERAL - Threemonths before the planned launch of shuttle Discovery and seven astronauts,NASA again is under dangerous pressure to fly so it can finish theInternational Space Station by 2010.

Once again, NASA has delivereda revamped external fuel tank to Kennedy Space Center before finishingtests to prove whether it is safe to fly.

This time,decisions will be colored by that mortifying moment last July when Discovery'sright wing was almoststruck by another chunk of orange foam insulation from the tank, a piecesimilar to the debris that doomedColumbia three years ago.

Managersinsist they will delay the launch if tests show conditions could lead toanother disaster, which would prompt an early shutdown of the shuttle programand the loss of thousands of jobs in Brevard County.

"Isthere a potential that you would fly something that you have less than fullconfidence in just because you're already going down the path towardflight?" said John Chapman, manager of the external tank project atMarshall Space Flight Center in Alabama. "The answer to that is absolutelynot.

"Thereis absolutely zero intent to fly that tank before that work is complete. . . .It's as simple as that."

However, a FLORIDA TODAY review of NASA documents shows that agency managers bowed to schedulepressure during NASA's attempt to return the shuttle fleet to service after the Columbia accident. The records show that some engineers argued for changes tothe part of the tank that shed foam on Discovery's flight, but were overruledby managers.

In February 2003, Columbia's seven astronauts died when their shuttle disintegrated over Texas duringatmospheric re-entry. Investigators blamed a hole in the heat shield, causedwhen a piece of tank insulation broke free during launch and struck the leftwing at high speed.

Today, thismuch is clear: NASA never will be able to completely stop the foam insulationfrom breaking free from external tanks in flight. But the agency has madesignificant progress in preventing debris large enough to cause catastrophicdamage to an orbiter.

"Youguys ought to be aware, and we have got to make it clear to everybody we talkto, when we launch the next flight, there is still going to be foam come offthe tank," shuttle program manager Wayne Hale told KSC workers in ameeting last month.

"Wehave not got a plan in place that is going to eliminate all foam loss off thetank," he said. "That is a big goal, and we don't think we are goingto get there in the life of the program."

NASAconcedes the near-hit on Discovery averted the kind of damage that could havetriggered a risky rescue mission. Astronauts would have docked at the spacestation and waited while NASA scrambledto launch a second shuttle.

WithDiscovery, a 3-foot (almost one-meter) slab of foam broke away from a longwedge of insulation -- dubbed a Protuberance Air Load ramp, or PAL ramp --designed to provide a wind shield for critical fuel pressurization lines andelectrical cables that run along the outside of the tank.

It nowappears their suggested changes could have made a difference.

NASAremoved and replaced 10 feet (three meters) of the ramp to make other changesin the area. On that section, workers used a new and improved process toreapply the foam. The debris later shed during Discovery's launch came from the28-foot part (8.5-meter) of the ramp that had not been replaced.

But ratherthan change the tank itself, managers changed the ground rules for the debrisanalyses. Several members of an independent oversight group took exception withthat approach.

"Themiddle of a design review does not seem an appropriate time to be changing therules," they said in comments added to the ReturnTo Flight Task Group's final report. A NASA manager told them, "That'swhy we're changing the models, so we don't have to change the tank."

Ultimately,NASA conceded foam or ice debris large enough to cause catastrophic damagestill could come off parts of the modified tank.

A total of176 dings and gouges were counted on fragile heat-shielding materials designedto protect the orbiter and its crews from the intense heat of re-entry. Theaverage on previous flights: 144.

ArmandoOliu, the head of NASA's ice and debris inspection team at KSC, said the majorityof the damage was minor. That's a sign that the agency is making progresstoward eliminating the worst debris.

"Weknow the external tank is producing the majority of those debris hits, but it'sfrom small particles," he said. "What we've reduced is the potentialfor a major hit."

NASAmanagers decided late last year to removePAL ramp foam from the tank now being readied for the next shuttle flight.Engineers think it will be safe to fly the tank without the ramp, butconclusive tests and analyses are ongoing.

"Yourgut says it's probably an OK thing to do, but you don't want to bet the safetyof the vehicle on intuition," Hale said.

Wind tunneltests are under way in California and Ohio. Additional tests are scheduled in Tennessee in June. Discovery is set to launch July 1.

Hale sayshe would postponethe launch if the tests prove fuel pressurization lines or electricalcables might be ripped off in flight without the PAL ramp to protect them.

"Youdon't want to fool around with that because you can't stand for those things tocome loose when you go Mach 4. That would be a bad thing," Hale said."If the answer comes back and says the cable tray will come off, thenthat's not something we're going to fly with."