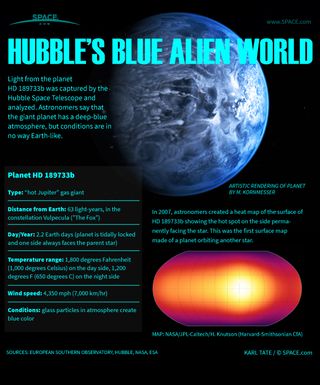 A giant blue planet is found, but the color could be due to glass particles in the hellish planet's hot atmosphere.
(Image: © by Karl Tate, Infographics Artist)

Light from the planet HD 189733b was captured by the Hubble Space Telescope and analyzed. Astronomers say that the giant planet has a deep-blue atmosphere, but conditions are in no way Earth-like.