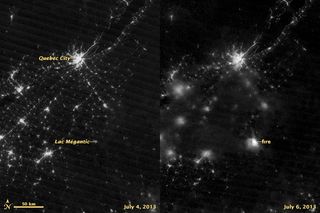 The image at right was acquired less than two hours after a train derailed in Lac-Mégantic, Quebec, early July 6. An image from July 4 for comparison underscores the magnitude of the explosion.
(Image: © Jesse Allen and Robert Simmon, using VIIRS day-night band data from the Suomi National Polar-orbiting Partnership)

When a runaway oil train derailed and exploded in a small town in Quebec over the weekend, it sparked an inferno that was visible from space.

The disaster in Lac-Mégantic, near the Maine border, flattened dozens of buildings and left at least 15 people dead early Saturday (July 6). As of Tuesday (July 9), authorities were still searching for 35 people who remained missing, according to Canada's Globe and Mail.

The powerful Earth-observing Suomi NPP satellite captured an image of the region at 2:59 a.m. local time (6:59 GMT) on July 6, less than two hours after the deadly derailment. A giant blaze was picked up by the spacecraft's Visible Infrared Imaging Radiometer Suite (VIIRS), though cloud cover at the time of the accident slightly blurs the image, according to NASA's Earth Observatory, which released the picture.

VIIRS is the largest instrument on the minivan-sized polar-orbiting Suomi NPP satellite. It's used to collect data on Earth's surface, capturing images of fires, ice, oceans, vegetation and clouds, and the suite has especially impressive nighttime capabilities.

VIIRS can pick up the glow from auroras, wildfires, city lights and reflected moonlight with its "day-night band," which detects light in a range of wavelengths from green to near-infrared. This band is primarily designed to allow scientists to collect detailed data on cloud, snow and ice formations during nighttime hours, but it's sensitive enough to pick up light from a single ship in the ocean.

According to the Earth Observatory, VIIRS can distinguish night lights with six times better spatial resolution and 250 times better resolution of lighting levels than its predecessor, the Operational Linescan System, part of the U.S. Air Force's Defense Meteorological Satellite Program.