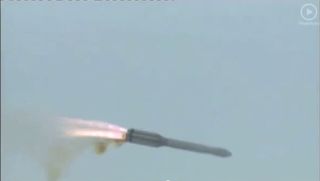 A Russian Proton rocket shows signs of trouble before crashing after a failed launch from Baikonur Cosmodrome in Kazakhstan on July 2, 2013 (local time).
(Image: © Tsenki TV)

A Russian rocket crash yesterday (July 1) was likely caused by an emergency shutdown of the booster's engines 17 seconds into the flight, according to news reports.

The unmanned Russian Proton-M rocket launched from the Baikonur Cosmodrome in Kazakhstanat 10:38 p.m. EDT (0238 GMT). The crash of the 17-story booster destroyed three onboard navigation satellites, which were worth almost $200 million. Video of the rocket crash from Russian state-run Rossiya-24 television shows the vehicle veering off course shortly after liftoff, and then breaking apart in mid-air and exploding in a fiery blaze once it hit the ground.

The rocket was carrying 600 tons of highly toxic heptyl, amyl and kerosene fuel, which were spilled when the booster was destroyed, Russian news service Ria Novosti reported. The burning fuel gives off a poisonous smoke, but officials said the cloud was being partially contained by rain at the launch site. [Photos: Proton Rocket Launch Failure]

People in the nearby town of Baikonur, 36 miles (60 kilometers) away, were told to stay home with their windows closed, and public shops and cafeterias were closed, Kazakh Interior Minister Kalmukhambet Kasymov said, according to Reuters.

"The impact occurred in a safe area that was evacuated for the launch and all personnel are reported to be unharmed," wrote officials at International Launch Services, which markets the Proton rocket to commercial satellite operators, in a statement. "From early reports, there was no damage to either launch Pad 39 or 24, near the impact area; there is only minor damage to nearby buildings."

During the accident, launch personnel were safe in bunkers, Reuters reported.

The Proton-M rocket was insured for 6 billion rubles ($182 million) with the Russian Insurance Center, according to Ria Novosti.

The three satellites onboard the rocket were intended to join the Glonass navigation network, Russia's counterpart to the United States' GPS system. Glonass, however, has been plagued with problems, including the loss of three satellites in December 2010 when another Proton rocket failed during launch. And during a fraud investigation last year, the Glonass network's chief designer was dismissedamid corruption and embezzlement accusations.

An investigation into yesterday's accident is underway, but early reports suggest a problem in the rocket's engine or guidance system may have caused the emergency engine shutdown, Reuters reported.

This was the fifth major Proton rocket launch failure since December 2010, with the most recent in December 2012, when a Proton booster launched a telecommunications satellite into the wrong orbit.

After that accident, Proton rockets were grounded until March. Upon returning to flight, three Protons launched successfully, before yesterday's crash. This latest incident will likely spur a more in-depth investigation into the root cause of the spate of failures before any more Protons fly.

"The Russian Federal Space Agency (Roscosmos) has set up a special commission to determine the cause of the failure and telemetry is currently being amassed and processed," International Launch Services officials wrote.