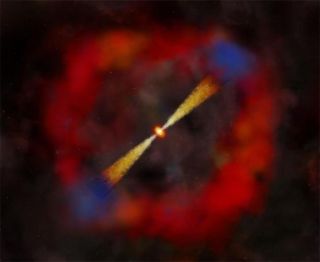 In an artist's conception of a gamma-ray burst, two jets of high-energy particles from a rapidly rotating black hole interacts with surrounding matter.
(Image: © CXC/M. Weiss)

Gamma-ray bursts are the most powerful events in the universe, temporary outshining several galaxies and likely signaling the birth of a black hole.

But astronomers have been puzzled by one burst, noted in 1998, that was comparatively dim. Was the weakling a loner, a total "freak" as one astronomer termed it? Or have others like it simply gone undetected.

The answer is written in this week's journal Nature, in which scientists tell of another weak gamma-ray burst. With two in the books and more expected, astronomers are now confident there is a whole range of strengths of these interesting flashes of high-energy radiation.

Gamma rays are part of the electromagnetic spectrum of radiation, which includes long and lowly radio waves on one end, visible light near the middle, and X-rays toward the high end. Gamma rays are the most energetic, having the shortest wavelength.

Gamma-ray bursts, also called GRBs, were first noticed in the 1960s. In just a few seconds or less, an extreme outburst can put out as much radiation as several galaxies. The bursts typically occur outside our galaxy, many billions of light-years distant. Their brevity makes them hard to study.

In recent years, however, observations have linked gamma-ray bursts to the formation of black holes immediately after supernova events, the explosive ends to massive stars' lives. The gamma rays shoot out in two opposing jets along the rotation axis of the black hole. Only those bursts that are beamed directly at us can be seen with present technology, because gamma rays don't stray far from their beamed direction.

Meanwhile, most supernovas don't emit detectable gamma rays. Instead, just an expanding ring of other radiation is noted.

A gamma-ray burst on Dec. 3, 2003 was detected by the European-Russian Integral satellite. Other telescopes on the ground and in space examined the event's afterglow in radio, visible light and X-rays. The eruption, catalogued as GRB 031203, was relatively nearby at some 1.6 billion light-years away.

Being close, it ought to have been bright. But GRB 031203 was about one-thousandth as strong as other gamma-ray bursts. Scientists are calling it a sub-energetic gamma-ray burst that resembles the 1998 event.

The finding fits theoretical expectations, showing the 1998 burst "was not a freak event, and in fact there are probably many more sub-energetic GRBs like this out there," Caltech graduate student Alicia Soderberg, lead author of one paper in the journal, told SPACE.com. "The fact that they are sub-energetic makes them fainter and therefore harder to detect."

That suggests there is a relationship between the strongest and weakest stellar explosions, and that there is a continuum of events in between with differing outputs, Soderberg and her colleagues say.

Sub-energetic gamma-ray bursts will one day outnumber their more powerful cousins once more sensitive telescopes are put on the case, the researchers believe.

"This is an intriguing discovery," said Caltech Professor Shrinivas Kulkarni. "I expect a treasure trove of such events to be identified by NASA's Swift mission scheduled to be launched this fall from Cape Canaveral. I am convinced that further discoveries and studies of this new class of hybrid events will forward our understanding of the death of massive stars."

Two papers on the burst are published in the Aug. 5 issue of Nature. The lead author on the other is Sergey Sazonov of the Space Research Institute of the Russian Academy of Sciences.

"The idea that all GRBs spit out the same amount of gamma rays, or that they are 'standard candles' as we call them, is simply ruled out by the new data," Sazonov said.