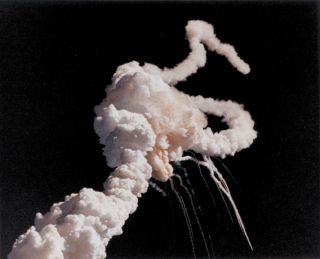 The STS-51-L Space Shuttle Challenger and its crew were lost shortly after launch.
(Image: © NASA.)

This article was updated at 12 p.m. EDT.

In this historical photo from the U.S. space agency, on January 28, 1986, the Space Shuttle Challenger and her seven-member crew were lost when a ruptured O-ring in the right Solid Rocket Booster caused an explosion soon after launch. The shuttle had been a success story up until the Challenger disaster became NASA's darkest tragedy. The shuttle broke apart 73 seconds after liftoff, killing the crew of seven. Media attention was high, as Challenger's crew included the first teacher to go in space, Christa McAuliffe.

This photograph, taken a few seconds after the accident, shows the Space Shuttle Main Engines and Solid Rocket Booster exhaust plumes entwined around a ball of gas from the External Tank. Because shuttle launches had become almost routine after 24 successful missions, those watching the shuttle launch in person and on television found the sight of the disintegrated shuttle especially shocking and difficult to believe until NASA confirmed the accident.

Editor's Note: This post was updated to refect the fact that Challenger did not technically explode, but disintegrated under aerodynamic forces. Challenger's last mission was also the 25th flight of the space shuttle program, not the 51st, as was originally stated in the NASA caption.