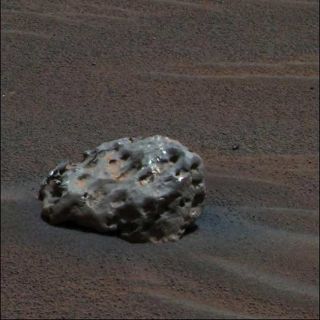 A basketball-sized iron meteorite found by NASA's Mars Exploration Rover Opportunity. The pitted object is mostly made of iron and nickel. Only a small fraction of the meteorites fallen on Earth are similarly metal-rich.
(Image: © NASA)

Iron meteorites typically thought to have formed beyond Mars might have started off closer to the Sun, created from the same material that makes up the inner planets, new computer models suggest.

After billions of years, some of them find their way to Earth.

The parent bodies of these meteorites probably come from the same disk of planetary debris that produced the Earth and the other inner planets, explained William Bottke of the Southwest Research Institute.

"This means that certain iron meteorites may tell us what the precursor material for the primordial Earth was like," said Bottke. "There's also the possibility that larger versions of this material may still be hiding among the asteroids. The hunt for them is on."

The problem in trying to use these objects for understanding Earth, however, has been that most meteorites come from the distant asteroid belt, a region of the solar system between the Mars and Jupiter. Meteorites from that location tend to give clues about how things formed in that region and not around Earth.

However, simulations suggest that this may not be the case.

Although these iron meteorites reside in the distant asteroid belt, Bottke and his team found through computer simulations that the parent bodies were most likely formed in the inner solar system closer to Earth.

They verified this by looking at the composition of iron meteorites, which originated from cores of melted asteroids from early on in solar system history. This matched up with the computer model results of the kind of bodies that formed near Earth.

They also used their computer models to see how and where these objects have traveled through time. Simulations showed that some asteroid-like bodies spread out far enough to end up in the asteroid belt.

"While the amount of material reaching the asteroid belt was limited, much of it was placed in regions likely to produce meteorites," said SwRI researcher David Nesvorny. "En route to the asteroid belt, the parent bodies of the iron meteorites were repeatedly bashed by other bodies, allowing core fragments from numerous bodies to escape."

The study was detailed in the February 17 issue of Nature.