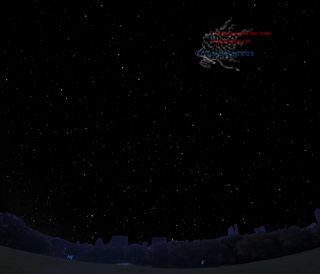 Eighty-eight constellations are officially recognized by the International Astronomical Union. An informal inventory of night sky inhabitants finds 36 mythological animals or beasts (such as a dragon, sea goat and a unicorn), 30 inanimate objects ranging from a mountain and a river to a telescope and carpenter's square, eight birds, 10 men and three women.

But probably the most unusual of the 88 can be found this week as darkness falls, high in the southwest sky: For all intents and purposes, we could call it a wig, although officially it is known as Coma Berenices, or Berenice's Hair.

This constellation is actually a large, loose galactic star cluster about 250 light-years away that appears as a faint shimmering patch of light on clear moonless nights; not unlike the famous Pleiades star cluster of the winter season. [See sky maps for May's best stargazing events]

Coma Berenices is by far at its best when seen in a pair of good binoculars. If, on the other hand, you attempt observation of the cluster with a high-powered telescope, the impression of a cluster will become totally lost because of the telescope's narrower field of view.

What makes Coma Berenices unique compared with the other constellations is that it's actually associated with a real person. Berenice II was an Egyptian queen, the wife of Ptolemy Euergenes (also known as Ptolemy III), who was the king of Egypt, and who reigned around 250 B.C. The story goes that Berenice sacrificed her beautiful blond hair and placed it in the temple of Aphrodite at Zephyrium as she vowed to do if her husband returned victorious from his war against Syria. Shortly after the royal couple's happy reunion, however, Berenice's hair mysteriously vanished; apparently it was stolen from the temple.

But it was Conon of Samos, a court astronomer and mathematician, who eventually convinced a very angry Ptolemy (who apparently was very fond of his wife's beautiful hair!) and his disconsolate queen that Zeus himself had taken the amber locks and put them up in the sky.

The story of Berenice's hair would have likely remained obscure and unknown were it not for the Greek poet, Callimachus, whose poem "The Lock of Berenice"formed the basis for our understanding of this constellation's history. Later, after the fall of Athens, "The Lock" was thankfully preserved by the Roman lyric poet Catullus, who translated it and added it to his own collection of writings (number 66) in the first century B.C. What makes "The Lock" strange is its angry narrator: Berenice's hair itself!  Apparently, the queen's hair was not very happy with its new place among the stars:

"Though placed on high, sad absence I deplore, Condemned to join my lovely queen no more . . . .

To heaven the goddess raised me, bathed in tears, An added splendour to the starry spheres.

Such is the story of how the cluster probably received its moniker, though this region of the sky was not generally recognized as the separate constellation of Coma Berenices until the beginning of the 17th century.

Initially, in fact, many of the star atlases of that era did not depict this star cluster as a celestial hairpiece. Indeed, on various star maps of the late middle Ages, the cluster was identified as a rose-wreath or ivy-wreath, and occasionally as a Sheaf of Wheat held in the hands of the nearby constellation Virgo.

Others saw it as the hair of Sampson, not Berenice, while still others regarded it as a tuft at the end of the tail of Leo, the Lion.  Credit is usually given to the astronomer Tycho Brahe for first cataloging it officially as Coma Berenices in the year 1602.

The sight of Coma Berenices high in the sky is bad news, however, if you are a fan of the Milky Way.

Just to the east of this cluster is the north galactic pole, one of two points in the sky lying farthest from the ghostly circle of light that composes the Milky Way. So right now, with the cluster high in the southwest sky at around 10 p.m. local daylight time, there is little to be seen of the Milky Way itself; it then runs around the horizon and is most always obliterated by the thicker layer of atmospheric "schmutz" that perpetually rims the horizon.

Conversely, when the cluster is rising or setting, the Milky Way appears to arch nearly overhead.  Nowadays, you'll have to arise at around 3 or 4 a.m. to get such a view.

I'll end this now by suggesting that after having her hair stolen, Berenice eventually learned her lesson and kept her wigs in a bureau; you see, she liked having a hair dresser.

I think on that note, I'd better cut this short.