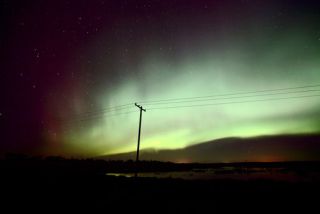 WASHINGTON — The United States' electrical transmission grid can be a fragile thing.

Sewage treatment plants, water filtration services and other key utilities rely on the grid to power their facilities. But some officials and experts worry that the infrastructure is exceedingly vulnerable to natural and human attack, said speakers and panelists at the fourth annual Electric Infrastructure Security Summit held here earlier this week.

While most vital organizations have enough backup power to last for a few days or a week, even essential facilities, such as hospitals or military bases, probably could not continue to function during a large-scale blackout that lasted more than a week.

Yet such extended blackouts could happen, as a result of a man-made electromagnetic pulse (EMP) or an extreme solar storm.

"For a large, interconnected power grid just in North America — even with three grids — you can have a disturbance footprint that spans the entire North American continent," said John Kappenman, principal investigator for the National Academy of Sciences Space Weather Study.

In Kappenman's worst-case scenario, copper wires would melt, making it very difficult for engineers to get the grid back online within weeks or even months.

Most coronal mass ejections, or CMEs as these particle streams are called, fly harmlessly past the Earth. But if a large solar eruption were to impact the planet in just the right way, it could disturb the Earth's geomagnetic field, possibly causing long-term blackouts.

In 1859, a large coronal mass ejection fried telegraph lines in Europe and North America, and auroras were visible in the tropics; a smaller CME in 1989 knocked out power in Quebec for half a day.

Man-made events are also a threat. During the Cold War, atmospheric tests of nuclear weapons were discovered to create electromagnetic pulses, knocking out power in areas below the air bursts.

A powerful EMP triggered by a hostile nation or terrorist organization above the United States would probably have a similar effect to that of a solar storm or CME.

How bad would it be?

Researchers have modeled a few different scenarios to examine what might happen if a solar storm or EMP were to hit the U.S., but each study produced somewhat different results.

One report conducted in 2010 by Oak Ridge National Laboratory in Tennessee estimated that  125 million people could be out of power if an extreme solar storm or EMP event occurred, said Joseph McClelland, director of the Office of Energy Infrastructure Security in the Federal Energy Regulatory Commission.

"Some of those outages would persist. Some people would recover, but some of them would persist for four to 10 years," McClelland told TechNewsDaily. "The cost would be $1 [trillion] to $2 trillion."

"The NERC [North American Electric Reliability Corporation] report said that the most likely event would be [that] the grid would collapse because of reactive power flow, and that collapse would prevent equipment damage," McClelland said. "So the minimal damage — it wasn't really defined — it just said the most vulnerable transformers might be damaged, but recovery would be hours or days as opposed to months or years."

During either an EMP explosion or solar storm over the United States, transformers responsible for funneling power to the grid could overload, frying the wires used to transport electricity to a region.

The currents that enter the system from above during these events would flood the grid, rendering it inoperable.

"The induced currents that enter the power grid during these storms are essentially DC currents, and because they are DC currents, they interact with the power grid in adverse ways," Kappenman told TechNewsDaily. "They essentially take all of the devices, like large transformers, that have a magnetic circuit … and begin to hijack that mode of operation in undesirable ways."

Even disaster efforts could be stymied during a long-term, possibly nationwide, blackout.

Today, relief efforts rely upon creating a staging area in a nearby unaffected city or town. But if the blackout affects a huge swath of the country, that won't be a possibility, Kappenman said.

"Pre-emptively shutting down the grid is maybe the only thing we can do in the very near term, but that in and of itself will generate some of the same disaster scenarios," Kappenman said.

"The bright side of this is that this is something that we can perhaps recover from in the matter of a few days," he added. "And it would be days — not hours, not minutes, but days — before we could recover."

The cost of prevention

Kappenman added that it is still possible to protect the electrical transmission grid from these kinds of issues.

By installing a refrigerator-size separator between the ground and the transformer, utilities around the country can filter out the harmful effects of the induced currents that would flow into the grid, he added.

The total cost for this kind of preparation would be about $1 billion, but that averages out to around 46 cents per person per year, Kappenman said.

"[This kind of change] is certainly within our means as a society," Kappenman said.

This story was provided by TechNewsDaily, a sister site to SPACE.com. Follow Miriam Kramer @mirikramer and Google+.