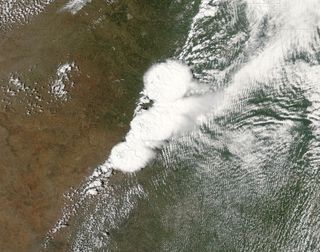 NASA'S MODIS satellite captured this image of the storm system that created the F-4 tornado in Moore, Okla. on May 20. The photo was taken at 2:40 p.m. CDT (3:40 p.m. EDT, or 1940 GMT), just before the twister touched down.
(Image: © NASA/GSFC/Jeff Schmaltz/MODIS Land Rapid Response Team)

The beginnings of Monday's (May 20) disastrous tornado in Oklahoma were caught from space by a weather satellite in orbit.

The GOES-13 satellite, which is operated by NASA and the National Oceanic and Atmospheric Administration (NOAA), imaged the movement of storm systems in the south-central United States between May 19 and 20, including the storm that sparked a tornado in Moore, Okla., estimated to be an EF-4 in strength, on Monday at 2:56 p.m. CDT (3:56 p.m. EDT, or 1956 GMT).

The tornado barreled through  Moore, a city of about 55,000 people that lies within the Oklahoma City Metropolitan Area, with winds that were likelybetween 166 and 200 mph (267 and 322 km/h), given its estimated strength, killing dozens and destroying property over a 20-mile-long (32 kilometers) stretch of land. The system that generated that twister can be seen toward the end of the tornado video footage, according to officials at NASA's Goddard Space Flight Center in Greenbelt, Md.

The GOES-13 video shows storm systems that sparked other tornadoes in the Midwest from Monday afternoon into the evening. Several separate tornadoes developed in Kansas, Iowa and Oklahoma, and the storms extended along an extended path from Texas up through Minnesota.

Residents in Moore, the worst-hit city, were warned of the possibility of tornadoes for days in advance by local National Weather Service offices; a tornado warning was issued 16 minutes before the tornado actually formed.

This was the fourth tornado in 14 years to strike the town of Moore directly, and the first tornado outbreak reported in Iowa since late May 2012.