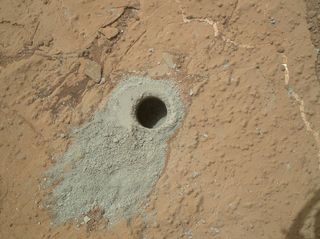 NASA's Mars rover Curiosity drilled into this rock target, "Cumberland," on May 19, 2013, collecting a powdered sample of material from the rock's interior. Analysis of the Cumberland sample will check results from "John Klein," the first rock on Mars from which a sample was ever collected and analyzed.
(Image: © NASA/JPL-Caltech/MSSS)

NASA's Mars rover Curiosity has broken out its trusty drill again, pulling samples from deep within a Red Planet rock for the second time ever.

The 1-ton Curiosity rover bored 2.6 inches (6.6 centimeters) into a rock dubbed "Cumberland" on Sunday (May 19), NASA officials said. The resulting powdered sample will be delivered to the robot's onboard science instruments in the coming days.

Curiosity first used its drill to collect samples back in February, boring into a nearby rock called "John Klein." That operation revealed that ancient Mars was likely capable of supporting microbial life — a groundbreaking discovery that the mission team wants to confirm.

"The science team expects to use analysis of material from Cumberland to check findings from John Klein," NASA officials wrote in a mission update Monday (May 20).

Curiosity touched down inside Mars' huge Gale Crater last August, kicking off a two-year surface mission to investigate the Red Planet's past and present habitability. It has spent the time since then close to its landing site, putting just 2,300 feet (700 meters) on its odometer thus far.

But the six-wheeled robot will soon start making some serious tracks. Curiosity's ultimate destination is the base of Mount Sharp, a mysterious mountain that rises 3.4 miles (5.5 kilometers) into the Martian sky from Gale Crater's center.

Mount Sharp's foothills show signs of past exposure to liquid water. Further, mission scientists want Curiosity to read Mars' changing environmental history like a book as it climbs through the many layers comprising the mountain's lower reaches.

Curiosity will likely start heading to Mount Sharp's base after it finishes analyzing the Cumberland samples and wraps up a few other high-priority science operations in the area, NASA officials said. The 5-mile (8 km) journey is expected the take months, as Curiosity's top speed across hard, flat ground is about 0.09 mph (0.14 km/h).