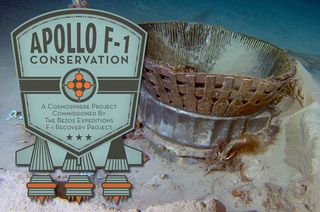 The massive moon rocket engines that Amazon CEO Jeff Bezos salvaged from the ocean floor are now undergoing conservation in Kansas, and the public is invited to watch the work in action.

The Kansas Cosmosphere and Space Center will open its new SpaceWorks Observation Gallery on May 24, giving visitors a clear view of the conservators as they work to preserve the parts for two mammoth Apollo Saturn V F-1 rocket engines that powered Americans to the moon.

Some of the recovered engine artifacts at the Hutchinson museum weigh as much as 2,000 pounds (907 kilograms), while others are as small as a dime. [Apollo Rocket Engines Recovered by Jeff Bezos (Photos)]

"These artifacts give us a magnificent window into history," Kansas Cosmosphere president Jim Remar said. "The F-1 remains the most powerful American liquid-fueled rocket engine ever developed. Studying these [salvaged] engines can provide us a tremendous amount of information about the design of future rockets and spacecraft."

Sixty-five F-1 engines were flown on 13 Saturn V rockets— five per launch — between 1967 and 1973. The engines lofted the first manned missions to circle and land on the moon, and they put the United States' first space station, Skylab, in Earth orbit.

The F-1 engines were long thought to be forever lost to the ocean floor, where they were purposely allowed to sink. But Bezos surprised the world in March 2012, announcing that he had funded a private expedition to find what at the time he believed to be the engines that launched Apollo 11, the mission that saw Neil Armstrong and Buzz Aldrin become the first men to walk on the moon in July 1969.

A year later, Bezos revealed that his expedition had been successful in raising the parts for two F-1 engines, though what mission they flew on was less clear. Four days after coming ashore this March at Cape Canaveral, Florida, the engines' components were delivered to the Cosmosphere to begin their conservation.

In all, more than 25,000 pounds (11,340 kg) of rocket engine artifacts were retrieved from the Atlantic Ocean by Bezos' private expedition team. Since arriving at SpaceWorks on March 25, they have undergone an initial cleaning with thousands of gallons of fresh water and anti-corrosion agents in order to remove ocean debris and prevent further decay.

As the parts are stabilized, museum specialists are taking each of the engine pieces through a detailed conservation process, including a thorough cleaning, photography, 3D scanning and computer-aided design modeling in order to determine its pre-treatment condition.

The museum's conservation team, which includes a maritime archeologist and aerospace engineers from Wichita State University's National Institute for Aviation Research, also is meticulously documenting each of the part's materials, manufacture and use.

"Conservation of the Apollo F-1 is very different from our past restoration projects," Remar said. "With the Apollo F-1 conservation, our goal is to preserve the integrity and original materials of the artifacts and prevent any further damage from corrosion or age."

"We will clean, document and study with modern scanners and technology, but when the project is done, the engines will remain in their current state," he added. "They are a tribute to man's quest for space travel, and a reminder of the vast opportunities awaiting those who dare to dream and explore."

The Cosmosphere's Apollo F-1 Conservation Project tour, which begins May 24, will shuttle visitors from the space museum's Apollo Gallery to the SpaceWorks conservation facility. Tickets for the tour are $1 each for Cosmosphere members and $5 for non-members. Advance reservations are recommended.

The recovered F-1 engines remain federal property under the auspices of NASA. After the Kansas Cosmosphere's conservation effort is complete, the engines are expected to be moved to museums for public display. Bezos earlier expressed his desire to see one displayed at The Museum of Flight in Seattle, which is located near the offices of Amazon.com and Blue Origin, his commercial spaceflight company.