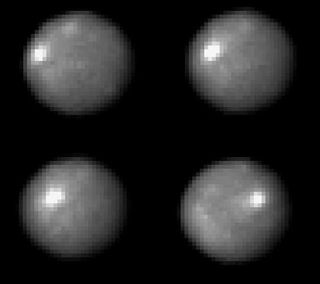 ANASA mission being readied for launch and designed to explore two largeasteroids in the solar system has been officially cancelled.

Dantzlertold SPACE.com that NASA is looking at distributing Dawn hardware toother missions currently being considered or in the future. "Some of thesubsystems should be good for other spacecraft," he said.

TheDawn spacecraft was to utilize an ion engine system, making use of xenon gas. Aslow-but-steady acceleration is created via an ionized propellant stream. Ionpropulsion relies on interactions of external and internal magnetic fields withelectric currents driven through the stream, thereby imparting thrust to aspacecraft on which is it mounted.

Makinguse of its ion engine, Dawn was to reach 4 Vesta in 2011 and 1 Ceres in 2015. These objects arethe two most massive asteroids known, yet are very different from each other.Scientists had hoped by studying the asteroids they would glean clues about theformation of the solar system.

Asa NASA Discovery-class mission, Dawn was selected in December 2001--one ofNASA's corps of spacecraft that are developed on a fast-paced schedule and atmodest cost compared to so-called "flagship" missions.

Themission had been on NASA's books for liftoff in mid-June 2006, but late lastyear was placed in "stand down" mode. Technical issues and cost-growth in theproject led to the decision, with an independent team assigned the duty to lookinto the problems.

Lastyear it was becoming clear that there were issues with Dawn, Dantzlerexplained. "The path for resolving all the technical issues and the certaintyon the cost number were not clear," he said.

Theindependent assessment team for Dawn was pulled together to dig in and take atlook at mission issues "and what it would take to get Dawn to be ready."

Thatteam reported to NASA in January that there were 29 individual major issuesthat needed to be dealt with before Dawn was ready to go, Dantzler said. Also,there was an increased cost growth of 20 percent over Dawn's confirmation costcap of $373 million, he added, as well as a 14-month or more delay in launch.

"Overthe past month or so we've been deliberating over those findings," Dantzlersaid, leading to yesterday's decision. Canceling Dawn was "the fiscallyresponsible thing to do," he said, "...and at some point you just have to drawthe line."

NASAreached a point where it was not clear how long and how much money it wouldtake to get Dawn off the ground, Dantzler said. The space agency is looking ata close-out cost--handling such things as hardware storage and close-outpaperwork--of somewhere between $9 million to $12 million, he said.

"Thisis clearly a tough decision. We don't take it lightly at all. But, ultimately,I believe it's the right one for the good of the Discovery program," Dantzlersaid.

Whenword came last year of the stand down, Dawn's principal investigator,Christopher Russell of the University of California, Los Angeles (UCLA) told SPACE.comthat the mission could tolerate a later launch date - without any scienceimpact. He remained hopeful that NASA would allow the mission to proceed tolaunch.

"Iam having a difficult time processing and accepting the cancellation," saidLucy McFadden of the Department of Astronomy at the University of Maryland in College Park, Maryland and a Dawn team member.

"Withthe success of the Discovery Program's Deep Impact and Stardust missions,and the recent and exciting scientific results from the Hubble Space Telescopeon Ceres...we were poised to emerge into the asteroid frontier with the Dawnspacecraft," McFadden told SPACE.com.

McFaddensaid that scientists can better understand asteroids as true protoplanets, "ifwe could only send the spacecraft there." Furthermore, there are equallyintriguing clues to the intricacy of Vesta, a very different asteroid that wasalso on Dawn's trajectory, she explained.

"Thereare hundreds of people in this country and in Europe who have worked on the [Dawn]project for four years and had committed another decade to it...and now we aredropped," McFadden said. "What can I say? It makes me cry."