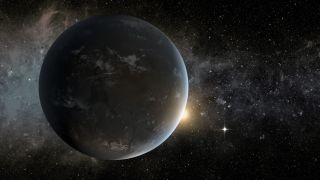 This artist's concept depicts Kepler-62f, a planet 1.4 times the size of Earth that circles in the habitable zone of its host star. The small shining object at right is Kepler-62e, another potentially habitable world in the five-planet system.
(Image: © NASA/Ames/JPL-Caltech)

Astronomers are closer than ever to finding a true alien Earth, though the process may be slowed by budget cuts, scientists told members of Congress Thursday (May 9).

Officials from NASA, the National Science Foundation and the SETI (Search for Extraterrestrial Intelligence) Institute gave testimony to the House Science, Space and Technology Committee about the state of exoplanet research, saying researchers were closing in on planets around other stars that are the same size and distance from their suns as Earth.

"Within the next few years, we will have the privilege of answering this age-old question: In the universe, is there anywhere else like home?" said Laurance Doyle, principal investigator for the Center for the Study of Life in the Universe at the SETI Institute. [6 Ways to Discover Alien Planets]

Astronomers have already found more than 800 planets orbiting distant stars. Most of them are large gas giants or worlds a bit bigger than ours called Super Earths. A few, though, are small enough to be rocky, and some are almost Earth-like. Within the coming months and years, scientists hope to find a terrestrial planet that could host liquid water.

"The next step for detecting life in the universe will be most likely biomarkers," Doyle said, referring to elements such as oxygen detected in the atmospheres of alien planets that might indicate the presence of living organisms on its surface. "Oxygen is indicative of plant life, possibly animal life, and maybe even intelligent life. It could be that the first detection of extraterrestrial life may be forests."

"There's no question the budget environment has caused us to make some tough choices," John Grunsfeld, associate administrator of NASA's Science Mission Directorate, told members of Congress. "We're very fortunate that we have high-value observatories on orbit. One of the things we have to prioritize is, what are we going to keep operating on orbit?"

Older telescopes may have to be shut down due to a lack of funds, and the development of newer tools may be delayed, he said. For example, because of budget cuts, NASA has had to push back the start of the new Transiting Exoplanet Survey Satellite, also known as TESS, by about six months.

"Some of the new observatories are more expensive to operate than the older observatories we used to have," said James Ulvestad, director of NSF's Division of Astronomical Sciences. "In order to operate those new tools, what sometimes has to give in the short term is the research grants to individual investigators."

For example, he said, the NSF has invested significantly in the new ALMA telescope in Chile (ALMA stands for Atacama Large Millimeter/submillimeter Array), which is a joint project among North America, Europe and Asia. Yet the NSF's budget woes mean it might not have enough money to give adequate grants to U.S. researchers applying for telescope time at ALMA.

"If we're not able to fund out investigators to do the research, some of the best exoplanet science done with that telescope might be done by our international partners, and not by our own investigators," Ulvestad said.

Many members of Congress expressed excitement for alien-planet research, and sympathy for the fiscal challenges the science agencies faced.

"Until the American people can help us address the entire piece of the federal spending pie, people who depend on discretionary spending are going to continually feel pinched, which is problematic," said Research Subcommittee Chairman Larry Bucshon, R-Ind. He asked the scientists how to communicate the value of their research to his constituents. "What can I tell people why what you're doing is important to the American people?"

"Investments in NASA, the NSF, in basic research, is really the investment in our future, and it's not an abstract thing," Grunsfeld, a former astronaut, responded. Money spent developing high-tech instruments for NASA telescopes, for example, stimulates the industrial innovations that are at the core of our country's prosperity, he said. "If we start cutting back on the basic research, on trying to solve very hard problems … we'll just start losing ground on the kinds of innovations that drive our economy."